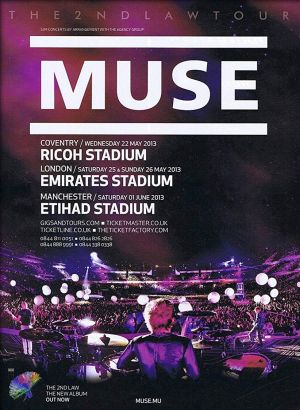 The Unsustainable Tour, also known as '2013 Summer Stadium Tour', was Muse's second largest tour up to this day, followed only by the Simulation Theory World Tour in 2019. It included various production elements, from a giant robot patrolling the stage to a floating light bulb, to big fire balls bursting out of the stage's very own "chimneys". The tour took place during Summer of 2013. 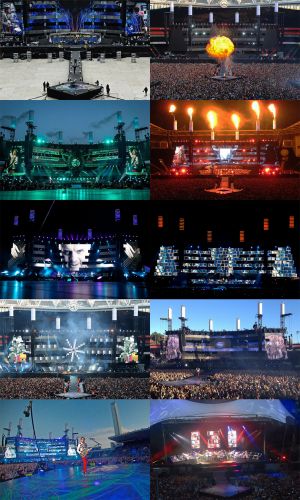 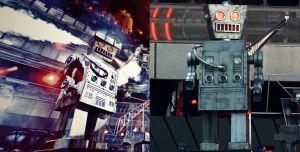 Lightbulb acrobat and the actors

The first gigs of the tour were announced in November of 2012. The tour started with four gigs in the UK before going on to mainland Europe and finishing in Helsinki. Not much has been known about the production and what was to come up until the very first gig. Because of that, when Muse held production rehearsals at the Ricoh Arena in Coventry, testing out fire cannons on top of the stage, people living nearby thought the arena was on fire.

The tour featured Dracula Mountain becoming the set staple. The shows featured an intro called the The 2nd Law of Thermodynamics or the Bomb Intro, as it was called on the setlists, which segwayed into Supremacy's elongated intro. Both of these elements were exclusive to this tour. The last show of the tour also featured debuts of Yes Please, being played for the first time since 2000 and Agitated, played for the first time since 2001. This was also the first time that Starlight closed all the sets of the tour.

Matt ditched the guitar on Starlight and, like the arena tour, shook hands of the audience during Undislosed Desires, also joined by Dom and Chris after leaving the B-Stage.

There was a wide rage of support bands for the tour. The UK shows featured support acts by Dizzee Rascal and The 1975 , joined by Bastille, who also went on to open for the band in mainland Europe with Biffy Clyro, You Don't Know Me, L.A., We Are The Ocean, Arcane Roots, SX, Balthazar, Fun, Polly Money and Paramore. Dizzee Rascal also returned for the second Paris night. Skip The Use, Calibro 35, Datarock, Deaf Havana, French Films and Mew were also part of the support act line-up for the tour.

The stage for the stadium tour was completely different to that of the arena tour and was reminiscent to that of the H.A.R.P. tour, with long wings and a long cat-walk, connecting the B-Stage to the main stage. Compared to the arena tour, there was no physical moving 3D pyramid present, however, the LED screens behind the band were designed to project the pyramids' visuals onto them, vaguely mimicking the pyramid being there. The LED screen half-circle behind the band however did remain, and with it the roulette and all other elements which were projected on it during the arena tour.

The stage also featured six large chimneys lined at the back of the stage on top of the trussing, releasing big balls of fire and smoke at various points of the gig.

One of the main attractions of the tour was Charles the Robot, a large, approx. 3 metre tall robot with light-up eyes and mouth, who patrolled the stage during Unsustainable and sometimes came out in the audience before the show. The robot was operated remotely by crew members. More on Charles here.

During Blackout, a large floating light bulb appeared above the audience, housing an acrobat, who, when the solo kicked in, jumped out of the bottom, released some confetti and performed aerial stunts while held on ropes attached to the bulb. The act was similar to that of the floating Hullabaloon act during the H.A.A.R.P. tour and the UFO during The Resistance stadium tour.

Special confetti were to be used during Animals - The Muso. The band used a 20 Muso note, which was designed to resemble a 50 Euro bill, the most widely circulated Euro denomination. The banknotes were inspired by the Foo Fighters dollar confetti, which the band liked, so they contacted Lee Martin and Morning Breath to design their own confetti money.

The Euro-inspired confetti were replaced by the Dollar-inspired ones for the Coachella gigs in 2014.

This was the first tour to feature actors performing during certain songs. Two actors were present, one during Feeling Good and the other during Animals. The actress during Feeling Good represented an office worker who was stressed out by the job which resulted in her drinking and dying by drinking gasoline. The actor during Animals represented a "filthy" banker (who was also present in the visuals for the song during both arena and stadium shows), who went on stage during the last part and started throwing Musos in the audience, before, at the end, when confetti was released, being completely engulfed in money, resulting in a heart-attack and his death. Both characters were placed into coffins below the catwalk during Undisclosed Desires, allowing Matt and the camera to go in and show the audience the two being dead.

Muse's fourth ever live DVD, titled Live at Rome Olympic Stadium, was filmed in Rome, showcasing the tour. This was their first 4K live film, which was premiered on November 29th, 2013 as a special one-off screening across various movie theatres across 20 cities worldwide and 40 other locations the next day. The band attended the premiere at La Géode in Paris, France. The movie was directed by the same director who directed the H.A.A.R.P. DVD. It was released in DVD and CD formats, with audio being mixed by Chris Lord-Alge.

More on the DVD here.

The setlist structure was similar to that of the arena tour, albeit longer and with a slow section played on the B-stage.

At certain gigs, the setlists were shortened and modified to fit the setting of the stage (such as at the Waldbuhne gig in Berlin) but overall, the tour featured one of the longest setlists.

Gallery from the production rehearsals at Ricoh Arena in Coventry. Source: muse.mu