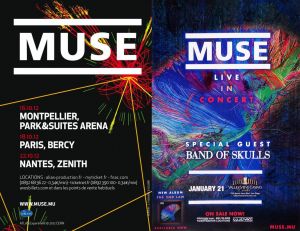 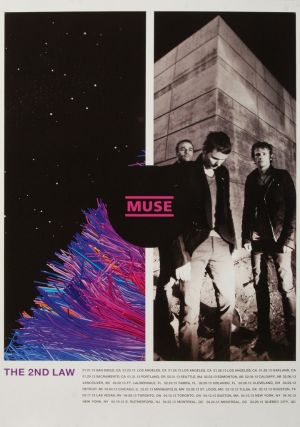 Poster for all U.S. and Canada gigs

The 2nd Law Tour or The 2nd Law World Tour was a tour that took place between October 2012 and December 2013 in Europe, Asia, North America and Australia in support of The 2nd Law. The tour started in Montpellier in France and ended in Sydney.

The tour and it's first gigs in Europe were announced in early Summer of 2012. The tour started in Europe, in Montpellier's Park&Suites Arena and spanned over three European legs in 2012, with the second one beginning in Olympiahalle Munich and the third one scheduled to begin in Oslo's Spektrum. The latter one had to be postponed due to Matt breaking his foot and started in Helsinki's Hartwall Arena instead.

The tour then went on to a short Japanese leg in 2013, with two gigs at Saitama Super Arena before heading over to North America with three legs - The first one starting in San Diego, the second one in Fort Lauderdale and the third one in Charlotte. In the Summer of 2013, the indoor tour went on a break for The Unsustainable Tour to take place in Europe.Ž

In October of 2013, the band went on a South American tour with leg one of the arena shows starting in Guadalajara's VFG Arena and ending in Mexico City's Palacio de los Deportes. After the South American gigs came the Australian leg which started in Perth and ended in Sydney.

Additionally, allthough not officially part of the tour, seven additional festival gigs took place in 2013. The production was similar to the arena gigs.

In North America, Muse also had V.I.P. posters made which were made unique for each gig and were designed by local artists.

The support bands for The 2nd Law tour included The Joy Formidable, who opened for Muse during the first leg of the tour between Montpellier and Manchester gigs, with the exception of night one in London, where, due to illness, fIN opened. Between the Dublin and the Łódź gigs, EverythingEverything opened for Muse and Deap Vally joined the support line up, performing between the Helsinki and Hamburg gigs. For the Amsterdam, Antwerpen and Strasbourg gigs, Andy Burrows opened for them.

The Ruse supported them on the South American and Birds of Tokyo opened for Muse during the Australian leg. 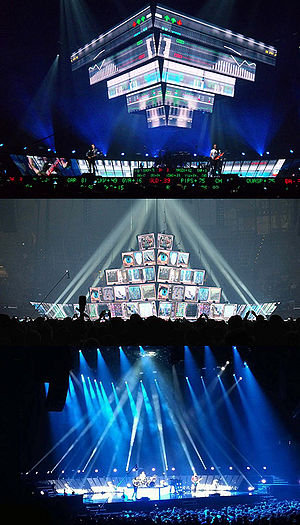 Held above the centre of the stage was a giant upside down pyramid composed of many screens, which was revealed usually after the third song of the set. There were also screens lining the back and front of the stage. The screens displayed various different visuals during the concerts fitting with the themes of the individual songs.

During Undisclosed Desires Matt would walk up and down the barrier, shaking hands with fans.

After Plug In Baby the screens would display a falling white ball and a roulette with red and black tiles and also a single green tile. Stockholm Syndrome was printed on the black tiles and New Born on the red. Whichever one the ball landed on decided which song the band would play. However, this was for visual purposes only and the song they would play was always printed on the setlist. The ball would not land on the green tile until the North American leg of the tour.

Muse played two consecutive nights in Saitama, Japan. The setlists were identical to those of the European leg of the tour. However, on the first night, Exogenesis: Symphony Part 3 (Redemption) made its live debut, replacing Sunburn / Falling Down. This was the only time the song has been played live to date. During the song, a music video directed by Japanese comedian Tekken was displayed on the pyramid. Sunburn was played on the second night.

The setlists remained largely unchanged from the previous legs of the tour. However, there were a few notable changes. Falling Down and Host were both dropped from the setlists. Feeling Good returned to setlists for the first time since 2011. The second piano slot was removed, leaving Explorers, Sunburn, United States of Eurasia and Feeling Good to fight for a position in the setlist. Sign o' the Times was played once on the tour. Animals was not played at a lot of the gigs. Towards the end of the tour Dracula Mountain was played instead of Monty Jam. Mutations in the order of the setlist were not uncommon, but the general structure remained the same.

Some of the songs featured during The Unsustainable Tour and Asian festival dates were carried over into this leg of the tour. Neutron Star Collision and Unnatural Selection were played for the first time in 3 years in Nashville, with Unnatural Selection replacing Stockholm Syndrome and New Born for much of the leg, though they both made occasional appearances. Agitated was sometimes played after them. Citizen Erased returned to setlists for the first time since 2011. Blackout and Hyper Music were occasionally played at the start of the second encore. Guiding Light and Butterflies & Hurricanes also appeared. Fury was played at Pittsburgh for a fan's 100th Muse gig.

The Australian setlist was identical to the previous leg's. No new songs were introduced.