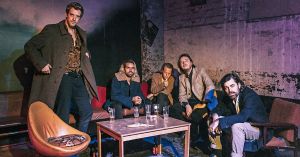 The band were formed in 2004. In 2005, the band won the Kunstbende and Westtalent competitions and in 2006, they won Humo's Rock Rally Audience award, the so-called "KBC Publieksprijs". In August of the same year, they released their self-titled debut EP. In early 2007, Quartier and Verfaillie were replaced by Casier and Claeys. After recognition by bigger stations such as Studio Brussel and Radio 1 and some touring, including a tour in South Africa, the band started working on the first album in 2009, called Applause, which was released in 2010. The album recieved positive feedback from the press and the public, especially in Belgium and the Netherlands. The band recieved the Music Industry Award for Best Album of 2010 at the MIA Awards 2010.

Their second album, Rats, was released in 2012, which brought them another Music Industry Award for Best Album. This brought them even more recognition around Europe, with the French Libération newspaper claiming it is one of the best albums of 2012.

2015 saw the release of the third album, Thin Walls. On the album, they worked with Ben Hiller, known for his work with Depeche Mode and Blur. The album was one of the 19 records nominted for the IMPALA Award for album of the year. The supporting tour for the album stretched across the whole of Europe, with the band playing large concert halls and festivals in Belgium, France, the Netherlands, United Kingdom, Italy, Switzerland, Turkey, and Ukraine.

In 2019, the band released their fourth album, Fever.

Balthazar supported Muse during The Unsustainable Tour in 2013, at Werchter Festival Grounds.