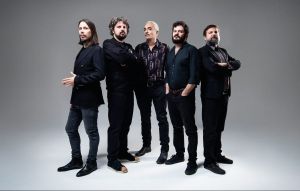 Calibro 35 is a funk, jazz and alternative rock band from Milan, Italy. Formed in 2007, the band consists of Enrico Gabrielli on keyboards, flute, saxophone and xylophone, Luca Cavina on bass, Massimo Martellotta on guitar and keyboards, Fabio Rondanini on drums and Tomasso Coliva, who's official role in the band is "sound research and production", but he also plays some keyboards and guitar. Coliva is also known for working with Muse as the primary studio engineer on every album ever since Black Holes and Revelations.

The band started out as a five-day long one-off studio project, re-recording obscure music from Italian exploitation movie soundtracks. The first self-titled album, mostly containing re-works of 1970s soundtracks by Maestros such as Ennio Morricone and Luis Bacalov, was released in 2008. The album also contains first compositions by the band. The unexpected criticism led the band to tour around Italy and Europe. One song from the album, Una Stanza Vuota, was sampled by Child of Lov on the song One Day, featuring Damon Albarn.

In 2009, the band won an award for Best Italian Tour at PIMI/MEI awards. In 2009, they also embarked on the first tour around the United States, playing at HitWeek Festival in Los Angeles and at Nublu and Zebulon in New York City. They also performed on Jason Bentley's radio show Morning Becomes Eclectic on KCRW. In September, they co-headlined the closing even of Milan Film Festival with Jet.

In 2010, they released the second album, Ritornano quelli di.... The album contains several original songs written for an American documentary called Eurocrime. A song from the album, called Uh Ah Brrr was also used in Red (2010 Movie), starring Bruce Willis and John Malkovich. At the same time, they also worked on a score for the Italian/Spanish pulp movie Said. Another song, Il Consigliori, was sampled by Jay Z on his song, Picasso Baby.

After some gigging around Europe and the USA, 2011 saw them working on the third album in New York City, at Mission Sound. The album was released in 2012 and is called Any Resemblance To Real Persons Or Actual Facts Is Purely Coincidental. The title track from the album was sampled by Dr. Dre for his 2015 Compton album on the song One Shot One Kill (featuring Snoop Dogg and Jon Connor).

The fourth album, Traditori di tutti, was released in 2013. The album only contains original songs and is the first album to do so. After the release, the band went on an extensive European tour, playing most major cities. In 2014, the Italian national radio, Rai Radio 1, commisioned all jingles and library music to the band. In the same year, they worked on scoring another full length movie called Sogni di Gloria / Daydreaming, which was awarded as "Best Feature Movie" at Houston Film Festival and Rome Independent Film Festival.