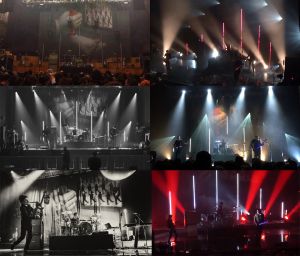 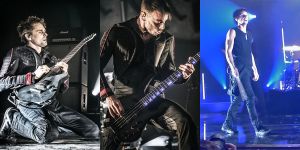 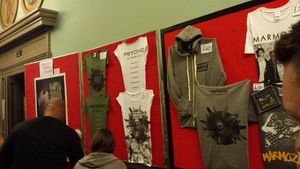 Merchandise for the Psycho UK Tour

The Psycho UK tour was the first tour of the Drones era that took place in March of 2015. It's named after the first announced song from the album Drones, Psycho, which was released on March 12th, 2015, three days before the tour began. The tour ran between 15th and 23rd March.

Through the course of the tour, Muse played in various medium-sized venues across the UK. In most of them, they haven't played since the Origin of Symmetry tour. It was the smalles tour Muse have done in years.

Despite the tour being small and only lasting for a week, it featured many songs that Muse haven't played in many years (such as Assassin, Uno and Muscle Museum). The tour also featured the live premieres of Psycho, Reapers and Dead Inside.

The tour was filmed and the three new songs, together with The Handler's soundcheck, each shot at it's own location, are available in pro-shot form on the Drones CD/DVD Limited Edition.

The Psycho Tour was first announced by Matt Bellamy on Twitter on March 10th, 2015, and was later confirmed by Muse via Facebook on March 11th.

The stage setup was very basic, with a simple Drones album cover backdrop and a series of LED strip-lights, placed vertically behind the band in the shape of a pyramid together with light fixtures.

On the stage was a drum-riser, a Marshall stack and Morgan's keyboard. No piano was present on the stage as no piano songs were played during the tour.

Outfit-wise, the trio wore the jumpsuit costumes from the Psycho Lyric Video, allthough Dom kept the upper part of the costume unzipped and tucked behind the drum throne for easier movability when drumming. The jumpsuits were re-designed for future tours to have tops and bottoms separated with Dom having a lighter sleeveless top.

The tour also marked the return of the Hullabaloons for the first time after The Resistance Tour.

Revealed on March 11th, 2015, Marmozets were the support band for the tour.

Moriaty also supported Muse together with Marmozets in Exeter only.

The tour saw the regular playing of many rare songs from the previous tour as well as the return to setlists of songs which hadn't been played for years. Uno was played for the first time since 2003. Muscle Museum and Assassin were both played for the first time since 2007. According to Matt Bellamy, the setlists were based on Musers comments the band saw on Muse messageboards, about what songs they really want the band to play.