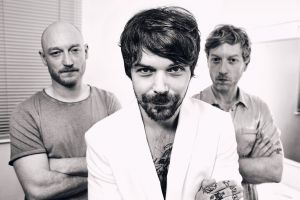 Biffy Clyro (referred to as Biffy) are a three piece rock band from Ayrshire, Scotland. The band consists of Simon Neil (guitar, vocals) and twin brothers Ben (bass, backing vocals) and James (drums, backing vocals) Johnston. The trio have been together ever since their start in 1995 and have since then released eight studio albums; Blackened Sky in 2002, The Vertigo of Bliss in 2003, Infinity Land in 2004, Puzzle in 2007, Only Revolutions in 2009, Opposites in 2013, Elipsis in 2016 and Balance, Not Symmetry in 2019, the latter of which being a soundtrack album to a film of the same name, co-written by Neil. Ever since 2007, they are accompanied by two live-members, former Oceansize members Mike Vennart (guitar, backing vocals) and Richard Ingram (guitar, piano). Similar to Muse, the band have worked on album art with Storm Thorgerson and they have worked with Rich Costey on Elipsis. On their song 'Bubbles', Queens of the Stone Age frontman Josh Homme played the lead guitar and the solo.

Biffy Clyro are a regular at opening for Muse, having been the support act at the Wembley Stadium 2007 gig on 17th June, and the Parc des Princes gig in 2007, with another support gig at the Wembley Stadium 2010 gig on 11th of September and further support gigs in Sydney (both nights), Melbourne (both nights) and Perth. Later, in 2013, they've also supported Muse on both their 'The 2nd Law' and 'Unsustainable' tours.

James Johnston from the band, attended Muse's gig in Glasgow on 16th March 2015.

Howard on Biffy Clyro in NME Magazine - "I've always liked them; I've always liked great three-pieces. Apparently their album is full of pop songs, but that new single they have with all the strings is incredible - having that kind of string arrangement with that kind of rock song doesn't feel that typical. They're pushing into new areas. And the drummer sings! They've taken their time like we did but it seems like now they're really stepping up."