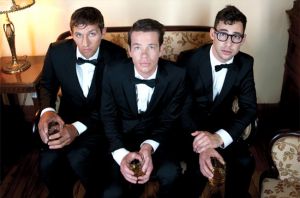 Fun (stylized as fun.) was an American indie pop band from New York City, USA. The band consisted of vocalist Nate Ruess, and multi-instrumentalists Andrew Dost and Jack Antonoff. The band was formed in 2008, after Ruess's former band, The Format, split up. Dost was part of the band as a touring member and Antonoff met the two after Steel Train, his (now former) band toured with The Format. The first single was released shortly after they got together, for free, in Spin's August 20th 2008 article on the band. After that, they embarked on a tour supporting Jack's Mannequin.

Work on first album began in late 2008. The album, Aim and Ignite, was released in August of 2009, recieving positive feedback by critics and the public upon it's release. The album reached number 26 on Sputnikmusic's top 50 albums of 2009. The album peaked at 71 on the U.S. album charts.

In 2011, the band released C'Mon, a joint single with Panic! at the Disco. Fun opened for them during the Vices & Virtues Tour in 2011. In the same year, they also announced that their second album would be called Some Nights, released in 2012. The album features one of their most known songs, a single titled We Are Young, featuring Janelle Monáe. On March 7, 2012, the single reached the No. 1 spot on the Billboard Hot 100 chart. In 2012, they performed the song at the MTV EMA's and in February of 2013, the band performed the song at the 55th Grammy Awards. The album brought them a Grammy in the Song of the Year category, aswell as Best Pop Vocal Album category. while We Are Young won Song of the Year and was nominated as Record of the Year. The band also won a Grammy for Best New Artist. The same year, they also joined Queen for special renditions of Somebody to Love and Fat Bottomed Girls at the iHeartRadio Festival. 2013 also saw the release of a Live EP called Before Shane Went To Bangkok: Live in The USA.

After several TV performances throughout 2013, the band announced, in February of 2014, that were taking some time off to pursue other projects, including Nate Ruess's solo projects, and Jack Antonoff's production and song-writing career with Taylor Swift, Lana Del Rey, St. Vincent, Carly Rae Jepsen and more.

Fun supported Muse during The Unsustainable Tour in 2013, on night one in Stade de France, Paris.