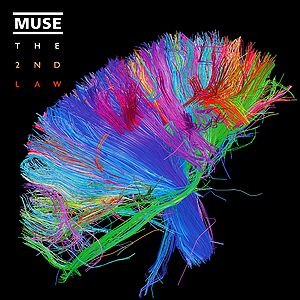 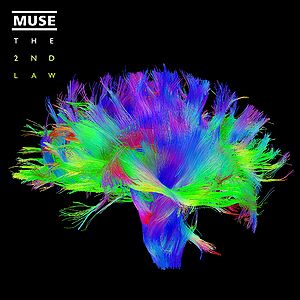 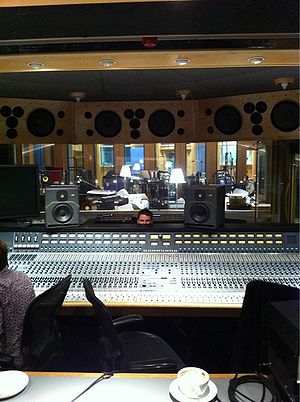 In an NME interview, Chris said "We'll definitely start working on a new album next year [2012]"[3] He went on to say "I think we'll definitely take some time off after this touring period because it's something we've never done. I think the most time we've had off is about six weeks in the last 12 years, so we're due a break." In another NME interview, Matt said that he was thinking about writing a more personal music project for their next album. "I sense that that's going to lead to a writing project that will be more personal, rather than talking about grand political concerns. That itself might lead to material that's more suitable for smaller venues."

Chris has said in a recent interview that the band want to do something "radically different" on their next album. The bassist told Kerrang! magazine that it felt like they were "drawing a line" under their past and were eager to embrace new ideas. He said:"[The band] feel like we are drawing a line under a certain period of what we've done in our career. It feels like it's time to move on and do something radically different." However, he also admitted that it wasn't always easy to progress and push their sound forward, adding: "But then you could get into the studio and go back to what you're comfortable with. You get in the studio and there's a natural process and you have to see where a song will take you."

The name "The 2nd Law" references the second law of thermodynamics, which is quoted in the album trailer as follow

"All natural and technological processes proceed in such a way that the availability of the remaining energy decreases. In all energy exchanges, if no energy enters or leaves an isolated system, the entropy of that system incre,cre,cre,cre,c,c,creases. Energy continuously flows from being concentrated, to becoming dispersed, spread out, wasted and useless. New energy cannot be created and high grade energy is being destroyed. An economy based on endless growth is...Unsustainable"

Near the beginning of 2010 Muse indicated they had been working on potentially two new songs, one of which was ready for recording. One was mentioned by Dom in an interview with regard to Muse providing new music for the 2012 Olympic games.[4] This turned out to be Survival. Dom also mentioned a "love song" the band had written originally intended for the Twilight Saga: Eclipse soundtrack, stating that the band "were ready to record" in Australia during the Big Day Out tour. This turned out to be Neutron Star Collision (Love Is Forever)[5]

Later,when Matt was asked whether fatherhood was on his mind, he told MTV: "Yeah, I'm definitely going to bring out the Vibraphone, a lullaby, things like that. I'll definitely get a lullaby on there."[6] While lyrically this would appear to be Follow Me, Explorers would be more appropriate sonically.

During the NME Awards 2011, Matt and Dom humorously stated that there would be "a lot of chords" on the album and that Matt already had many ideas flowing through his head, including one song which Dom said sounded very cool already.

With information gathered from twitpics, the album is known to feature a brass section and an orchestra. Additionally, Matt has been seen holding a "Kitara", a guitar-shaped synthesizer controller. In an interview with NME Chris said that Matt was talking about "messing with grooves and loops". In an interview with NME in 2011, Matt said he was wanting to introduce some 90's rave into the band. The album will also have a lot of choirs in some songs like Survival. 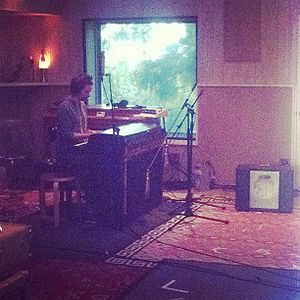 Bellamy told XFM: "We've actually never made a full album in London, we've made bits here occasionally." He added: "It would be nice to be based in the same place so we can go out and so we can make an album together and also socialise together at the same time." He also said: "It also means we can make the album over a longer period of time without having to pressurise it all in to a three week studio session, you can spread it out."[7] On November 16th 2011 Muse posted pics from Air Studios London England.

Back to the studio 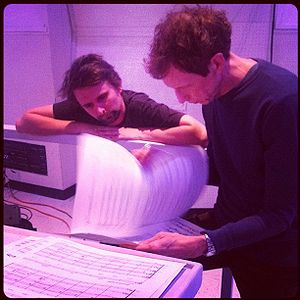 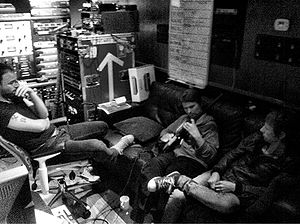 Wolstenholme said that, Muse will back to the studio by September in 2011, after Reading and Leeds festivals.

By October and November Muse started recording their sixth album.

On February 23rd, 2012 Tom Kirk posted via Twitter a picture of Bellamy showing his arrangements to the accomplished composer David Campbell [1]. David has an extensive background in arrangements and compostion of music.
Other pictures tweeted from Tom Kirk and the official Muse Twitter account show all the members of Muse working in Cello Studios, along with a Tweeted photo of Muse and the Brass section posing in Los Angeles. All this would indicate that Muse are fine tuning their existing pieces of music with a view for Classical elements to appear on the next album.
Muse also worked at Capitol Studios shortly after working at Cello. Contrary to previous quotes of the band saying the sixth album would be made in London, it appears Muse are focussing on the timely delivery of their new offering. Muse appear to have been also working with studio engineers Adrian Bushby and Tommaso Colliva.

On February 29th Paul Reeve posted a tweet stating, "Just confirmed dates for recording vocals for the new Muse album...You will not have heard anything like this from them before".

Bellamy posted on his Twitter that Muse would be producing the album themselves, although Paul Reeve has produced vocals for the project.

In a interview with Absolute Radio, Matt mentioned the new album may have influences from Justice and DIOYY, and that he was very into the 'hard electronica' sound at the moment.[8]

In an NME article according to Dom the band "went to see Skrillex in Camden around October. We went 'Fuck, it's so heavy', loved it. It was like a full metal gig, they had the circles of death, people were moshing, I hadn't seen a reaction like that to electronic music before. We took inspiration and came up with Unsustainable." Matt added, "Some of that hard dubstep or brostep coming from America is capturing the imagination. The moshpit has moved from guitars and gone towards the laptop, so with that song we're trying to see if we can challenge the laptop. We created something that was dubsteppy but we wanted to see if we could do it with real instruments. We wanted to ask, 'Can rock bands compete with what these guys are doing?'" In the same NME Article, the song Panic Station was described as having "demented 80's elements such as backwards 'Let's Dance' drumbeats and riffs reminiscent of INXS' 'Suicide Blonde'".

Also, in a recent interview Matt revealed that he took influence from "The Dark Knight Rises" composer Hans Zimmer, claiming:"He's the greatest film composer of recent times. That song 'The 2nd Law', you can definitely hear some Hans Zimmer influence."

On the 6th June 2012 a movie-style trailer was released for the album featuring music from the album, and announcing the title. It was accompanied by a release date counting down to 17th September 2012, a Monday, indicative of the UK release date.[9][10]

On 27th June 2012 Survival was debuted on Zane Lowe's show on BBC Radio 1. It was confirmed and simultaneously released as the Official Song for the 2012 Summer Olympics in London.

On 30th July 2012, the artwork for the album was revealed over a selection of 11 images. The final album artwork depicts an image of the Human Brain and all the neurons that make it up. The Image came from the Human Conectome Project.

On August 9th, 2012, Muse made the Deluxe Box of The 2nd Law available to purchase with the free music video of The 2nd Law: Unsustainable.

On September 24th, the album leaked. The same day, Muse announced the websites which would be streaming the full album worldwide that evening.

The 2nd Law Tour kicked off in October 2012 and continued until December 2013, stretching across Europe, North America, Asia and Australia.