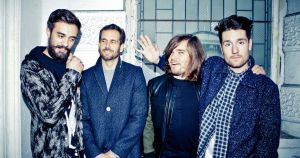 Their first EP, Laura Palmer, was released in 2011. Shortly after, the band was signed to Virgin Records and secured major support slots at festivals such as Glastonbury, Isle of Wight and Reading and Leeds. In 2012, after the release of the singles Overjoyed, Bad Blood and Flaws, the band gained even more recognition and commercial success. In 2013, they released their debut LP called Bad Blood, which also included well known songs Pompeii and Of the Night. In 2014, the band worked on the re-score of the movie Drive, co-writing and recording the song Driver, which was also featured on their 2014 mixtape Other People's Heartache, Pt.III, and featured then artists such as Haim, Lizzo, Rag'n'Bone Man and Skunk Anansie. In the same year, they were also part of the Band Aid 30 version of Do They Know It's Christmas?. After releasing new singles in 2015, their third album was released in 2016. Later, in 2018, after the collaboration with Marshmello, they have released another mixtape called Other People's Heartache Pt IV, featuring Craig David, James Arthur, Moss Kena and more. In June of 2019, they have released their latest album called Doom Days.

The band's drummer, Chris Wood, is noted by their singer Dan Smith as a big Muse fan. According to Chris Wood, Muse's 'Origin of Symmetry' was the reason why he wanted to play in a band. [1]

Bastille have supported Muse during The Unsustainable Tour in summer of 2013.

In 2016, Wood was present at the Krakow Live Festival in Poland. He helped Glen Rowe and the Muse crew with throwing hullabaloon in the audience. While doing so, he sprained his ankle as seen in this Instagram post of his.