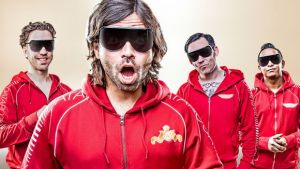 The name "Datarock" derives from a Norwegian words for "Computer" (Datamaskin), combined with the word "rock", meaning "rock music made on a computer".

Active since 2000, their debut album, Datarock Datarock, was released in 2005. It quickly made favourable reviews, especially in the UK, Australia and in their home country.

In 2009, the band released the second album, called Red. The third album, The Musical, was released in 2015, and in 2018, they released the fourth album, Face the Brutality.

Throughout the years, the band have released several songs which gained popularity amongst listeners and were included in various video games. Probably their most famous song, Fa-Fa-Fa, from their debut album, started out being the Coca-Cola advert, aswell as featuring in video games such as NHL 08, FIFA 08, NBA Live 08, The Sims 2: Free Time. It was also included as a free premium track for the iPod Touch/iPhone game Tap Tap Revenge 3, while a looped version of the song is the default alarm on Logitech Squeezebox devices. Another song from the first LP, True Stories, includes lyrics made up entirely of Talking Heads song titles, is featured as a promotional download in MP3 format from The Sims 3. The song Give It Up from the second album was included in FIFA 10.

The band are also known for their red "Datarock" tracksuits and sunglasses.

Datarock supported Muse on The Unsustainable Tour in 2013, at the Bergen and Oslo shows.