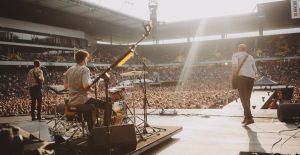 Arcane Roots were an alternative rock band from Kingston Upon Thames, England, UK, consisted of guitarist & vocalist Andrew Groves and, bassist Adam Burton and drummer Daryl Atkins. They've been active between 2006 and 2018, and have released two albums and five EPs. The band's style consisted of a mixture of alternative rock, math rock, post-hardcore and progressive rock.

In 2012 they claimed that Biffy Clyro and Muse gave them a 'kick up the bum', saying that they've had an inspirational experience with both bands. In preparation for their release of their 2017 album, Melancholia Hymns, they made a playlist of songs with the following description: "The sounds that inspired our new single Off The Floor" [1]. This playlist included Hyper Music by Muse.

After the release of the single Landslide and the announcement of an EP of the same name, and a short tour in support of the EP in June of 2018, it was announced on their Facebook page in August, that the band would be splitting up "to look inwards and take on new long term projects".

They've supported Muse on The Unsustainable Tour in the summer of 2013.