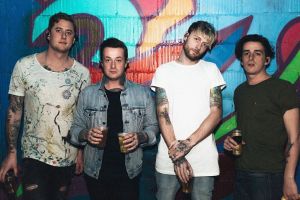 Deaf Havana are an English Alternative rock band from Hunstanton and King's Lynn in Norfolk. The band was formed in 2005, when the original members, Ryan Mellor, James Veck-Gilodi and Lee Wilson met at the King's Lynn campus of The College of West Anglia. The three were joined by Tom Ogden and Sebastian Spitz. This early lineup saw Veck-Gilodi singing and Mellor taking guitar and vocal duties, while Spitz was playing guitar, Ogden was the drummer and Wilson took up bass guitar. In 2006, Spitz was replaced by Chris Pennells.

In 2006, the band began writing songs for the first EP called Evangeline, released in 2007. This EP recieved strong positive reviews and gained them recognition. The same year, they started working on more new songs, resulting in a release of another EP, It's Called the Easy Life, which was released in 2008. In the beginning of 2009, the band went on a UK tour with We Are the Ocean and The Urgency.

After the UK tour, the band entered the studio to work on the debut LP, Meet Me Halfway, at Least, released in late 2009. Right before the release of the album, the band underwent an UK Metal Hammer tour with Young Guns and The Casino Brawl. Following the release, in 2010, they went on several tours across UK and Europe, including a headlining mini-tour around UK with All Forgotten and Francesqa, and an European tour with Emery and Emarosa. Just prior to the tour, it was announced that Mellor would not be touring with them due to personal circumstances, eventually leaving the band and replaced by Max d'Albiac.

2011 saw the release of Fools and Worthless Liars, their second LP. The first single, I'm A Bore, Mostly, was played by Zane Lowe and Sara Cox on BBC Radio 1. Just before the release of the album, they went on a supporting tour with You Me at Six, and after the release, they supported Skindred at some European shows, before returning back to the UK and went on a supporting tour with Architects. The band went on a headlining tour in 2012 with support from The Swellers and The Dangerous Summer.

In 2012, they started composing songs for the third album, Old Souls, released in 2013. During this year, the band announced a partenrship deal with Vevo. The album recieved positive feedback. In 2013, they went to support Bruce Springsteen at the Hard Rock Calling Festival. They also played Reading and Leeds festivals at the BBC Radio 1 Stage in 2013. At the end of 2013, they went on a headlining tour at eight locations around UK, finishing at The Roundhouse in London.

In November of 2015, the band released a new single, Cassiopeia, from the fourth album, All These Countless Nights, which was set to be released in 2016, but was postponed to 2017. In 2015, Pennells also left the band.

Following the release of All These Countless Nights, Veck-Gilodi and Phil Gornell (producer) went to work on the fifth album, Rituals, which was written as a challenge, to subvert the band's writing process, and present songs representative of the band in present. They wrote everything in a computer with the band coming up and playing all the parts. They set themselves a deadline of April to finish all the parts and if any of it was good, they would make the album available in August. The album was eventually released. On the album, 5 track also feature the London Contemporary Voice Choir with whom the band also performed at London's Union Chapel for the War Child charity.

Deaf Havana supported Muse during The Unsustainable Tour at the Loreley gig in Sankt Goarshausen, Germany.