MuseWiki, wiki for the band Muse
(Redirected from Tom Kirk)
Jump to navigation Jump to search

Tom Kirk is the media manager for the band and might also be referred to as any of the following: the camera man, the kebab man, Ross Geller, The Pianist, Tom Kirk and any matey play on his name (e.g. Kirky etc). He is known to be the brother of Helen and Alex Kirk. He arranged and edited footage for their video releases Hullaballoo DVD and the Absolution Tour DVD, he also filmed the Hullabaloo DVD documentary and most probably most backstage footage on any of Muse's DVD single releases, you can usually tell the culprit by wild and shaky camera work coupled with sporadic outbursts of giggling.

He would be the closest thing to a fourth member of the band, as he is always seen with them. Tom does play guitar in one of the B-sides ( Do We Need This probably), he was also part of the stamping people in the Absolution Intro, the finger-clicking in Time Is Running Out and perhaps some other random percussion-related ad-lib stuff.

He is an avid photographer and most of his Muse members shots are on the DVDs or on the official website. He runs the official website: he puts all the media, photo, videos, news and dates on there. He generally oversees the design and gets the whole thing together.

All the visuals you can see on stage during the shows are from Kirk.

His sister was Helen Kirk. Black Holes and Revelations is dedicated to her memory after her accident on Boxing Day in Dorset, travelling back from Christmas in Shaldon, Teignmouth. Tom's cousin Callum Taylor has appeared with Muse in Glasgow on bagpipes on the Glasgow Scottish Exhibition and Conference Centre 2009 gig and the SSE Hydro - 18th April 2016 gig on bagpipes.

what is this.. some kind of monopoly on fansites? are you the new rupert murdoch or something? i checked it out the other day and was quite impressed.(quite). must have taken some setting up. 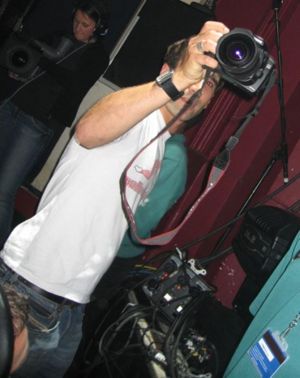 Tom is a Sony fan boy, all his cameras and camcorders used were made by Sony.

Anyone who follows twitter will agree, Tom is quite the twitterer providing tantalising Musey tit bits and insights in to the behind-the-scenes Muse action. As of late he seems to have a thing for his dogs Sir Charles and Lord Henry.

Without Tom Muse fans would be none the wiser as to what Matt, Dom are up to. Chris is also a frequent Twitterer co-ordinating football games with friends and fans.

When asked if he was a Buddhist, via a twitter follower, he replied with #AthiestButLikesBuddhaAndHisDressSense, confirming that doesn't have a religion.

Banoffeesky was a video production company, formed in January 2008. The company was established by him, Si Bennett and other colleagues, who produced visuals and video content for artists such as Muse, Pulled Apart by Horses, Lilly Allen, Paul Van Dyk and more.

The company was disbanded at around 2011, when Kirk moved to Los Angeles, where he co-founded Hidden Road Studios, together with Rowan Glenn. Like Banoffeesky, Hidden Road Studios also specializes in producing video content including both live visuals and music videos. Their clients, alongside Muse, include a variety of both musical artists, as well as TV shows and other companies such as Billy Idol, Coldplay Elton John, Google, Metallica, Netflix, Nickleodeon, Tyler The Creator, Khalid and more.