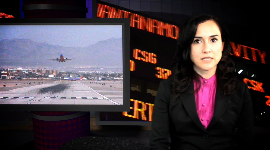 Directed by Tom Kirk, filmed by Matt Hayslett, with graphics from Dan Panosian. The news presenter at the beginning of the video is Dan's sister Elena Evangelo. An edited version of the video was released as a trailer to The 2nd Law on 6th June 2012.

On the 9th August 2012 the album The 2nd Law became available to pre-order from the official Muse store. Customers who pre-ordered from the muse.mu store will receive links to download the full "The 2nd Law: Unsustainable" video, as well as "The 2nd Law: Isolated System" on the day on 1st October 2012.