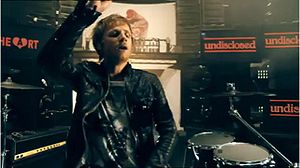 The music video was shot at Elstree Studios in Borehamwood, Hertfordshire (around 25km north of Central London) where Star Wars Episodes IV, V and VI were all shot during the late 70s and early 80s. The video is a futuristic, dystopian affair that finds the band performing in front of a mass of wires and various TV screens flashing up lyrics from the song. The video was directed by French duo Jonas et François, who have worked with Justin Timberlake, Kanye West, and produced Justice’s lauded ‘D.A.N.C.E’ video. [1]

Go back to Undisclosed Desires