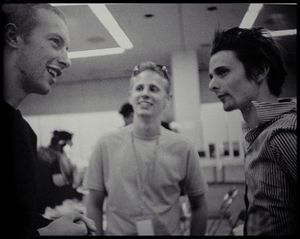 Chris from Coldplay with Matt and Dom back in 2000 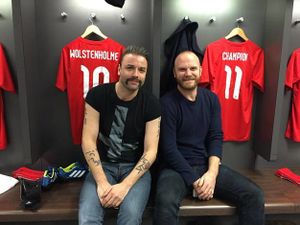 Chris and Will Champion in 2014
Error creating thumbnail: File missing
Matt and Chris, 2015

Coldplay and Muse are friends...fact.

One of their better songs, Politik, was produced with a wee bit of piano help from Matt Bellamy.

In an Interview from March 2001, Matt said: "Chris from Coldplay is really open and really confident." and that "He was round at Dom's the other day and was playing us some of his new demos."[1]

For the song "Fix You" Chris Martin claimed that he wanted to try and get the sound Matt achieved with the massive church organ on Megalomania but rather unfortunately could not find access to one.

Therefore it seems as though Chris Martin is a Muse fan, which is good, as Matt Bellamy seems to reciprocate the love, evidenced in his goading of the crowd at the Eurockéennes 2000 gig to "Go check out a band called Coldplay.....good band...".

Maybe this mutual appreciation stems from time spent together in early 2000 when Coldplay supported Muse for a UK tour.

About Coldplay's song "God put a Smile Upon Your Face" Chris Martin said: “That came out of playing live and wanting to have something with a bit more bounce. We were really getting into things like P.J Harvey and Muse – things with a bit more energy”. Still in the same album, about Clocks: “That’s the newest song on the record. We recorded that very, very fast. That was inspired by Muse”. [1]

On an old muse fansite, In the guestbook, Chris Martin wrote the following comment:

"this is a really interesting and exciting site. something all muse fans should be proud of. Most of the folks on here know the makers, I dont, im just a bloke in band and lets say at the moment muse = boss to my gang anyway. we are supporting them at the moment. and cant wait to perform before them on their first uk headline date this year at portsmouth.I know they have loads of fans down there so COLDPLAY are looking forward to it! Just finished recording some b sides in new york (posh eh) in a studio overlooking times square.! anyway congrats guys, keep up the good work. 10 outta 10. all we need is someone like you to do our site! chris martin."[2]

In a recent interview, Chris Martin says that they model their live shows on those of Muse, and the shows they create are heavily based around them. Martin later goes on to say that "But we will never get as extreme as Muse. We'll let them do the biggest thing and then think, 'Okay, how did they do it?".[3]

Chris Martin tweeted about Madness "Having been their opening act 13 years ago I'm proud to say that I think this is Muse's best song ever"[4]. Coldplay sang a snippet of "Madness" in 2nd of September 2012 at Stade de France, when they played Clocks.[5]