Like when the Madness video was going to be released, Muse released 5 animated gifs on their tumblr site, previewing the video on April 19, 2013.

It was filmed in January 2013 in Japan during "The 2nd Law" tour in that country, prior to the Tokyo Zepp gig. The video was filmed by Kirk and Tim Qualtrough. 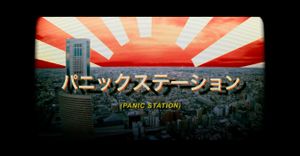 0:33-0:38 of the Panic Station video featured the Rising Sun flag