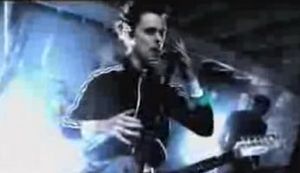 This video was filmed in Winston Churchill's home in Brighton. It cost £50 to make. The entire video was colour graded which gives it a stark, black and white grainy quality which adds to its gritty feel (it was made with a Sony Handycam, of which Kirk is a fan).

It shows the band in the basement playing the song, and the camera work is shaky and stops and starts again - for effect.

There are many shots of the camera attached to the guitar headstock, giving a 'down-the-neck' view of the strings being played.

A second video was released with live shots of the band, mostly taken from the 2001 tour and from the Hullabaloo DVD, in very similar style to the "In Your World" video.

Back to Dead Star