Time Is Running Out (video)

Time Is Running Out video

The video for Time Is Running Out was directed by John Hillcoat. It is based on the idea of a secret government running the world behind closed doors, but instead of making decisions they sit around playing games.

In the video, Muse had to act the whole song out, double the speed of the actual song because of the dancers had to keep in time and it was too slow for them to dance and keep in time.

Muse on the video

Bellamy: "I found Time is Running Out one of the most enjoyable videos to make because it felt like we weren't the only performers there. As we were performing there was a big group of people -20 or so- who were doing this big synchronized dance manoeuvre around us. And I really enjoyed it 'cause it felt like we were part of it as opposed to the centre. It was really impressive watching them do all their stuff as well. The original idea was a bit different, though".

Wolstenholme: "The director had a picture of the war room from (classic Stanley Kubrick film) 'Dr Strangelove'. And he said, 'Let's get a load of naked women and see what happens'"!

Bellamy: "His treatment was pretty non-existent, it was just... a picture. It was a very loose thing. But we thought he sounded like a good person to work with 'cause he was very open to our ideas. I wanted to do something like 'Around the World' by Daft Punk -a synchronized dance that was going on around us but in the style of 'Dr Strangelove'- so that was the idea for the video, and that was what it ended up being". 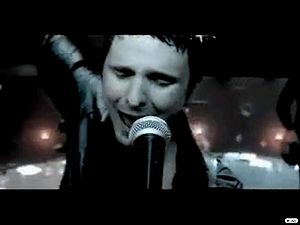 The first alternative video is basically the same as the original except that it is cut differently (hence the USA Cut name). The video seems to have more of the raw footage used with Matt doing funny faces.

There's a video that was released in the USA which features the band touring in the US. It was recorded and mixed by Thomas Kirk.

Back to Time Is Running Out