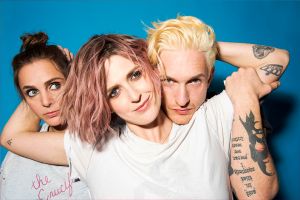 The band started with Armstrong and Medley writing songs in 2002 at ages of 16 and 15 and in 2004 they've completed their first studio recording with the song Changes. Soon after, in 2005, they performed their first gig at The Mint in Los Angeles, under the name Epiphany. In 2005, they renamed themselves to Dead Sara, as a reference to Fleetwood Mac's song Sara and it's lyric "Said Sara", which the band misheard as "Dead Sara".

In 2007, the band embarked on their first tour, supporting Endless Hallway and releasing a six-song EP called The Airport Sessions in 2008. After several changes to the bass and drummer positions, the band’s line-up finally coalesced in 2009 with Sean Friday on drums and Chris Null on bass, both of whom previously played in a band with Sonny Moore (Skrillex).

In 2010, the band started breaking through on radios, gaining them even more exposure. After going off tour with Bush in 2011, the band released their first single Weatherman, from the 2012 self-titled debut LP. In the same year, they toured with The Offspring and Neon Trees.

In 2014, they went in the studio again to work on the second LP called Pleasure to Meet You, which was released in 2015. After the release, bassist Null left the band. In the same year. they also covered Nirvana's Heart Shaped Box. The cover won the award for "Best Song, Original or Adapted" at the National Academy of Video Game Trade Reviewers annual awards 2015.

2017 saw them working on a six-song EP called Temporary Things Taking Up Space, which was released in 2018.