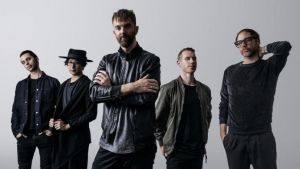 Birds of Tokyo are an Australian alternative rock band from Perth. The band was formed in 2004 from a collaboration between bands Tragic Delicate and Karnivool from which vocalist Ian Kenny came, joined by guitarist Adam Spark, bassist Anthony Jackson, guitarist Miki Cee, and drummer Adam Weston. Throughout the band's existence, Ian Berney replaced Jackson on bass and Glenn Sarangapany joined the band as the keyboardist. Miki Cee also left the band in 2008.

In 2007, the band were nominated for an Australian Independent Record Association (ARIA) Award for Best Performing Independent Album and Most Outstanding New Independent Artist. Their song Wayside was voted in at Number 61 in Triple J's Hottest 100 of 2007. In 2010, the band was nominated for six ARIA Music Awards. The album Brace peaked at number 3 on the ARIA charts. Albums Universes recieved an ARIA Gold status while, Birds of Tokyo and March Fires both recieved Platinum status.

Birds of Tokyo supported Muse during the Australian leg of The 2nd Law Tour in 2013.