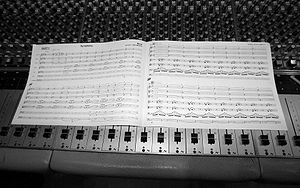 Score on mixing desk during recording

"Exogenesis: Symphony" is the last song on The Resistance,[1] and is split into three four-minute tracks, each separately named. It features an orchestra of "about 40 musicians" throughout, being described by Matt as "almost purely classical in style"[2] The song tells the story of humanity leaving a destructive Earth behind to populate elsewhere in the Universe.[3]

Matt later said that "This is influenced by Rachmaninov, Richard Strauss, Chopin and Pink Floyd. It looks at the concept of 'Panspermia.' It is a story of humanity coming to an end and everyone pinning their hopes on a group of astronauts who go out to explore space and spread humanity to another planet."

The first part of the song starts off mellow.[4]

According to Matt, "Part 1 is a jaded acceptance that civilisation will end."[5] The drum part displays a Massive Attack influence.[6]

In the Muse Q&A in November 2008, Dominic Howard stated that the song would change genres throughout, indicating a significantly different middle section.[4]

Matthew Bellamy stated, "Part 2 is a desperate hope that sending astronauts to find and populate other planets will be successful alongside the recognition that this is the last hope."[7]

The track by track review by Gigwise describes that it concludes in a "suitably Muse-like way" and that "the song builds into an emotive and epic chorus where Bellamy and Wolstenholme share vocal duties". [4]

Matt said, "...Part 3 is when the astronauts realize that it is just one big cycle, and recognize unless humanity can change it will happen all over again."[8]

American Figure Skater Jeremy Abbott skated to Redemption at the 2011-2012 World Championship in Nice. On an NBC broadcast the title of the piece was introduced as "Exogenesis." After the performances an announcer stated that Abbott was looking for "redemption." It is unknown whether the pun was intentional.

It has been played for the first time in January 11 of 2013 in Saitama Super Arena,Japan. More info here.

The term exogenesis is the technical name for panspermia, the hypothesis that life is seeded across the universe from other sources, for example, arriving to Earth on comets, hence "cross pollination".

The song was first mentioned in March 2008 as a "15-minute space-rock solo"[9] and mentioned by the band numerous times after that. Prior to that, it had been alluded to by Matt in 2007 as "a few bits and pieces that we kind of set to one side that were ... a little bit too progressive and symphonic for [Black Holes and Revelations]", suggesting that the band may have first attempted to record it in 2005.[10]

The orchestral parts within the song are arranged by Matthew Bellamy. He stated he wanted to do this himself as he "never wanted to collaborate with a string arranger as they may make it 'theirs'".[1] The orchestra which performed said parts was comprised of twenty-five musicians, who were layered into fifty parts, so as to keep production costs low.[11]

Chris said in an interview the piano parts from the song have been around for quite a while. He mentioned Matt always "plays these beautiful piano pieces that we could never figure out how to work into a Muse song until now."

During the recording session with the orchestra, Chris "felt a bit jaded" and was pretty upset for not being able to see the recording due to being sick at the time.

Dom plays the Timpani in the beginning of Overture.

Matt has wanted but been reluctant to play Part 2 live because of its difficulty.

You stole my overture, Trapped in God's program, Oh I can't escape

Rise above the crowds

Why can't we start it over again?

Just let us start it over again

And we'll be good This time we'll get it... Get it right

It's our last chance to forgive ourselves

Go back to The Resistance