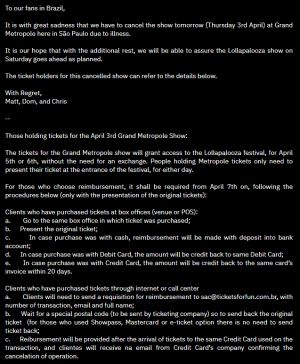 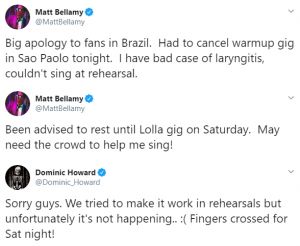 First info about the gig surfaced on February 14th, 2014, when a local music journalist posted a link to the announcement on PopLoad.[1]

Muse were supposed to play this venue on April 3rd, 2014, but this concert was cancelled the day before, in order to protect Matt's voice, who was hit by laryngitis a few day prior, for the Lollapalooza Brazil show. The band made an official cancellation announcement on the website.[2] Dom and Matt also apologized on their Twitter accounts.

Presumably, this show would have been similar to the Zepp show in Tokyo in 2013, where a lot of rarities were played.