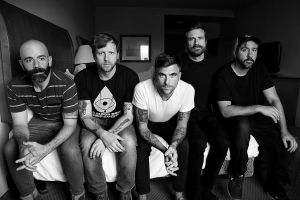 Circa Survive is an American band from Doylestown, suburb of Philadelphia, formed in 2004. The band consists of former members of Saosin, This Day Forward and Taken and is led by Anthony Green on lead vocals with Colin Frangicetto on guitar and backing vocals, Brendan Ekstrom on guitar, Nick Beard on bass and backing vocals and Steve Clifford on drums and percussion. They combine alternative rock, psychedelic rock, progressive rock, post-hardcore and experimental rock.

After their formation, they soon released their first EP called The Inuit Sessions in 2005 and after releasing their debut album Juturna in 20015 the band quickly made a name for themselves in the indie music scene. The LP has first been announced on the bands' MySpace page in 2004. The album has also been posted in it's entirety a few days before it's official release on their MySpace page. Juturna peaked at #183 on the Billboard 200. The sound of the album has been influenced by the likes of King Crimson, Björk, Zion Memorial Orchestra and more.

The second album, On Letting Go, was released in 2007. It entered the U.S. Billboard 200 at #24, selling about 24,000 copies in the first week. The sound of the band did not change radically for this album, but the band have became more polished and refined with tighter drums.

In 2008, after supporting Thrice and Pelican, the band started working on writing the third album called Blue Sky Noise, which wouldn't be released until 2010, produced by David Bottrill (who also co-produced Muse's Origin of Symmetry) and mixed by Rich Costey. Following the release, the band also released a cover of Scentless Apprentice by Nirvana. In late 2010, the band also released an EP called Appendage.

In 2017, the band embarked on a 10th anniversary tour of On Letting Go with support from MewithoutYou and Turnover. The same year, they announced and released the fifth LP called The Amulet. Following the release, a co-headlining tour with Thrice was also announced, taking place across North America. In 2018, the band released a deluxe edition of the album with several more songs added to it.

Circa Survive supported Muse during the second U.S./Canada leg of The 2nd Law Tour in 2013. They supported them at the Montville's Mohegan Sun Arena on April 13th.