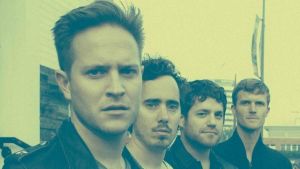 The Ruse are a four-piece indie rock band from Los Angeles, California, USA. The band consists of vocalist John Dauer, guitarist Jim Bilus, bassist Mark Stolze and drummer Jason Young. Formed in 2004, the band started playing tours in as early as 2005. In 2009, their song Beautiful Is Gone was selected by iTunes to be the single of the week. As a result, their album Midnight in the City reached number 21 on the Billboard chart.

The Ruse supported Muse in Mexico in 2013 during their The 2nd Law tour.

They also opened for Muse in 2015 during the Asian leg of the Drones Tour warm up shows in Bangkok, Singapore, Hong Kong and Seoul between 23rd and 30th September.