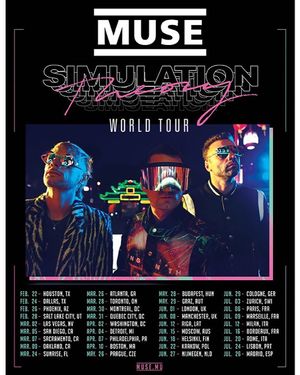 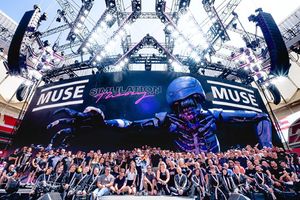 Entire crew with the band (source)

Simulation Theory World Tour was a headlining world tour, in support of Simulation Theory, that began on 22nd February of 2019 in Houston, Texas and ended on October 15th, 2019 in Lima, Peru. The tour was one of their biggest, if not the biggest tour yet, with over 1 million tickets sold. Howard admitted they've gone too far with this tour.

This is the first Muse tour in which the open-air show is the same as the arena show (excluding occasional song additions for open-air shows). It is also the first full headlining tour to not feature song rotations. Despite the tour originally planned to be a global stadium-only tour, the entire first portion of the tour in USA took place in arenas, with the stadium shows starting to take place with the Prague gig on May 26th, 2019. According to George Reeves, Muse's production manager, the initial planning conversations about the tour took place in all the way back in 2017.

Before the rehearsals or the tour production itself started, Bellamy talked about two hour sets. He also mentioned playing a 15 minute-or-so "metal medley", featuring bits of heavy songs (not just riffs). He said he'd like to play that because they would like to fit in as many songs in setlists as they can without surpassing two hours too much (due to fatigue). This medley was tested for the first time at the London Royal Albert Hall gig and later again at the Chicago Aragon Ballroom gig, both in 2018. The Royal Albert Hall version of the medley was, so far, the only one to include Dead Star and the Micro Cuts outro.

Propaganda and the Alternate reality version of Algorithm made their debut on the tour, and the acoustic gospel version of Dig Down made it's return after the Jools Holland performance. Algorithm's AR version has been shortened and a transitional segment into Pressure has been added to it. Pray was shortened and features no Valirian spoken word. Three short instrumental segues called "STT Interstitial" numbered 1, 2 and 3 also appear during the show.

Pray, a song written by Bellamy for Game of Thrones. has also made it's debut on the tour as an intro to The Dark Side. It includes Chris and Dom on big concert drums. The live version of it is shortened and includes no spoken word.

This is also the first tour on which Chris is playing bass, guitar, drums and a keyboard all in one set.

The US shows supporting bands were Walk the Moon and SWMRS (whose only US performances were the at Washington and Philadelphia gigs - with the band later performing at a few European gigs aswell).

For the European tour, the two were joined by a combination of known local bands aswell as well established acts which are Tom Morello, Weezer, Pale Waves, Dinosaur Pile-Up, The Atavists, Imodium, Kiefer Sutherland, Tiger Cave, Allusinlove, Andy Burrows, The Amazons, Mini Mansions, Nic Cester, SWMRS and Miles Kane, all of which supported Muse at various places during the EU legs of the tour. Later, for the Autumn leg of the European tour, Nothing But Thieves joined the support line-up again after their tour with Muse in 2015/16 together with Des Rocs.

The creative director behind the production is Jesse Lee Stout. He previously worked with Muse on the Drones 360 World Tour, on which he directed video content and interactive elements of the tour, and later during the North American Summer Amphitheatre Tour and the festival tour, where he took over the role of the production designer. Bellamy kept Stout up to date with ideas and his fascination with metamodernism during the album writing process. These conversations with Matt led to him working together on getting the looks right on the album packaging and promo photography, and later becoming the creative director for this tour. According to Stout, during the show, you can see various references to 80s and 90s pop culture (hints such as Gremlins, E.T., Terminator, Aliens, Back to the Future etc.). 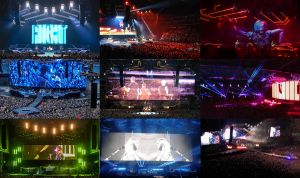 The stage design is similar to The Unsustainable Tour with the long catwalk, the big B-Stage and a big LED screen - but it still includes unique elements.

The main stage is designed as three basic diamond squares blending into each other. The stage then includes three more diamonds, which are smaller and are risen above the main stage. The center diamond acts as a drum riser and the side diamonds act as tech bunkers, as well as platforms, on which you can access the final seventh and eighth diamonds, one on each side of the main stage, which are risen up even more and are bigger in diameter, representing stage wings.

As mentioned, a larger B-Stage in the shape of a diamond is also present, with a longer catwalk connecting it with the main stage. The outer edges of the stage are all lit up with thinner solid light strips.

Behind the main-stage sits a big LED screen, with the sides of it being slightly bent outwards.

Finally, above the stage, is where the lighting trussing is. The whole of it is designed, when lit with strip lightning, to look vaguely similar, in overall shape, to the space ship featured on the Simulation Theory album cover art.

For the stadium gigs the set up was tweaked sightly. The catwalk and LED screen were more than doubled. As well as a large centralized LED speaker tower being added. In addition extra lasers and floodlights were added around the stadiums.

The tour also takes place on a few more regular stages, on the Werchter Festival, the IndyCar Classic Festival, the Singapore F1 gig and the Mexico Foro Sol gigs. For these shows, the stage design was kept the same as with the regular tour shows, however, the diamond-shaped podiums used were just regular stage risers with no additional lighting on the edge or the risers. A B-Stage with the catwalk was however present on both gigs, however, at the IndyCar Classic gig, it was limited to not having the riser, and thus the show's setlist had to be modified (e.g. the show starting with Pressure as Matt wasn't able to rise from underneath the B-Stage). For the Mexico gig however, they managed to play the whole set with this setup. Additionally, the spaceship trussing had to be abandoned for the Rock in Rio show.

As Stout said, "Murph" is the center piece of the show. He is based on the "Creator" from The Dark Side music video.

Throughout the entire show, the viewer can see Murph originating as one of the performers, which is injected with a flesh-eating pathogen and enchanced with robotic prosthetics, outfitted with a VR mask. He is then confined into a glass prison cell, which he escapes and later manifests physically into the venue - as an inflatable puppet.

Stout wanted the puppet to appear, in the context of the show, as a video game end boss that the band defeats at the end of Metal Medley and rejoices with the final song, Knights of Cydonia.

The nickname "Murph" is a homage to Murphy from RoboCop.

According to Howard, the band initially didn't want to unveil the puppet Murph, and wanted to surprise fans on the first show, but once they got it going at rehearsals, they couldn't resist posting content with it on their Instagram.

Bellamy was, during 2018 interviews, mentioning including performers during the shows. He drew some ideas for that from David Byrne's shows, which also include choreographed performances. He also mentioned once the shows being Beyonce-esque.

This tour features a group of 14 dancers performing during certain songs in the show (Algorithm - including the AR version, Drill Sergeant, Pressure, Propaganda, Break it to Me, Thought Contagion, Dig Down Acoustic and Starlight) and accompanying the band and the show.

During certain songs, the performers are in charge of lighting (spotlights during Break it to Me) and special effects (handheld CO2 cannons during Propaganda).

For stadium shows, more dancers are present in the team than for arena shows.

More on this page.

Despite Hullabaloons being a live staple for Muse ever since 2001, this was the first tour to include limited edition handprinted signed tour posters inside some of them on each gig. The poster art was designed by James White (Signalnoise), working with Tim Doyle (Nakatomi Inc.). More on the posters can be read about on White's official webpage here.

The three VR games contained in the Enchanced Experience package

The enhanced experience packages contain access to the "Mixed Reality Pre-Show Party", which will include photo opportunities with various props and whatnot from the Simulation Theory music videos, a bar service and a station with a series of VR-based arcade machine games (which have been made and produced by Microsoft and the band).

The VR games include:

The two London O2 shows in September were both filmed for film release. Bellamy hinted at filming the two shows in Summer of 2019 and started teasing the film's content in late Spring of 2020. The movie, which is a mix of film shots and live footage, was released in August of 2020, in cinemas and on digital platforms. 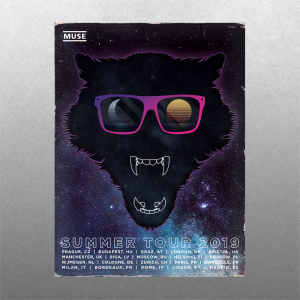