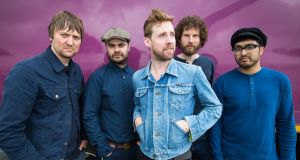 The band, under the name Kaiser Chiefs, released seven studio albums; Employment in 2005, Yours Truly, Angry Mob in 2007, Off With Their Heads in 2008, The Future Is Medieval in 2011, Education, Education, Education & War in 2014, Stay Together in 2016 and Duck in 2019. They also released one EP, Lap of Honour in 2005 and a compilation album, Souvenir: The Singles 2004–2012 in 2012. During their career, they had various popular singles, their most popular being Ruby from the album Yours Truly, Angry Mob and I Predict a Riot from the album Employment.

In 2008 in an interview for "digitalspy" Baines said his band is inspired by Muse.[1]

In 2019, they supported Muse on the Simulation Theory World Tour, specifically on the São Paulo, the Buenos Aires, the Santiago and the Lima gigs.