MuseWiki, wiki for the band Muse
(Redirected from The Maidstone Studios 2018 (gig))
Jump to navigation Jump to search 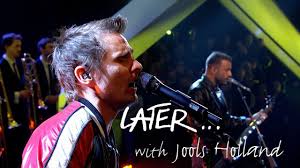 Pic from the gig, during Pressure 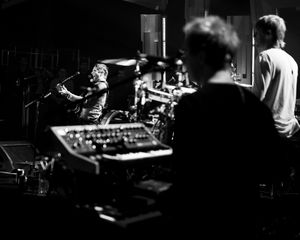 Pic from the rehearsal 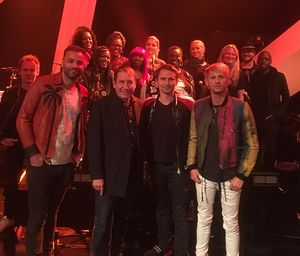 Muse with Jools and the choir

Muse played again, three years later, on this TV show. Announced on the BBC Two website on 24th September. They've played at 22:00 (UK time) and it was aired on BBC 2. Pressure and Dig Down were in the Tuesday broadcast available online shortly after it. Something Human and The Dark Side were aired during the Saturday broadcast.

They did a rehearsal the day before, playing Something Human, but the rest of the soundchecked songs are unknown.

Something Human and the Acoustic Gospel Version of Dig Down (featuring Jools Holland on piano and a full gospel choir) got their live debuts. This performance of Dig Down is the only one to feature Matt on acoustic guitar, Chris on bass, and Dom on real drums, as later performances saw Matt on piano, Chris on guitar and Dom on electronic drums. Pressure was played with a live brass band for the first time.

Matt briefly brought back the infamous 'The Shuffle Dance' during Pressure, marking the first time he's done that in years.