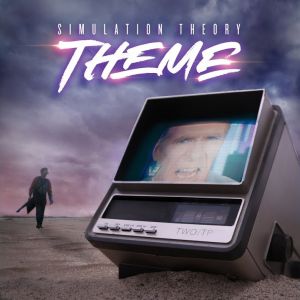 Released a week after Behold, The Glove, on September 4th, 2020, the song includes a sequenced heartbeat bass line, accompanied by a melodic arp sound. Two versions of the song have been released, an instrumental version and a newscaster version, both used in the Simulation Theory Film.

Alike Behold, The Glove, the song was first used and showcased to the audiences during the Simulation Theory Tour. Because of it's two distinct parts, a melodic one and a more sinister-sounding one, it was used under two different names, STT Interstitial 1 (intro to Madness) and STT Interstitial 3 (combined with Guitar Noise as an intro to Metal medley, during the inflation of Murph.

The song's spoken word talks about the humanity being controlled by the government through A.I. and virtual tools on the internet and mobile devices, after the fake virus has put the inhabitants of London in the Simulation Theory Film under lockdown. Allthough the lyrics draw parallels with the 2020 Covid-19 pandemic and the events surrounding it, it was written way before it happened.

The song is reminiscent of Ennio Morricone's The Thing soundtrack. It's also been compared to We Are The Universe.

Like the previous song, this piece was mixed and mastered by Aleks Von Korff. The words are spoken by actor Paul Hamilton.

The song is based around an eight-note synth bass line and an arppeggiated line with an arp lead melody line joining in at certain points. It also features the iconic 80s Moog kick sound and strings.

The faint wobbly bass synth sound that comes in before the last chorus is similar to the one used in Pray.

Like Behold, The Glove, the music video shows Bellamy in the middle of the desert playing a synthesizer on the beach, but in overcast weather. It also shows what happened after the events of the Simulation Theory Film.

This might be the beginning... Or the end of things, I'm not sure.

I do know that we've been lied to, and manipulated, for too long. Far, far too long. I'm sick and tired of it, god damn it!

We hide in our homes, scrolling through feeds of other people's fantasy, made up lives, while the algorithms give us bite size information, tailored to what corporations, lying politicians and foreign powers want us to see, and believe.

We blindly clicked accept to their terms and conditions too, too many times. And now, we are owned.

Now we have been reduced to nothing more than data, to be bought and sold to the highest bidder, so that they could sell us more crap we don't need, make us angry at things we never cared about!

We've turned in consumption machines, destroying each other and the only planet we have. Whatever happened to human dignity and privacy?

We thought we had escaped into our own quiet little worlds. But no. No, they had to invade our minds. They wanna control and manipulate the entire reality.

But I have to wonder, who are "they"? Is there even a "they" anymore?

Maybe, the algorithms and A.I. have become the new "they". And maybe they now control us and manipulate us. Well, they know us better than we know ourselves.

We have to wake up! It's time to wake up! Wake up, people, wake up, don't just sit there watching. Do something!

This is our last chance to take back control, before it's too late!