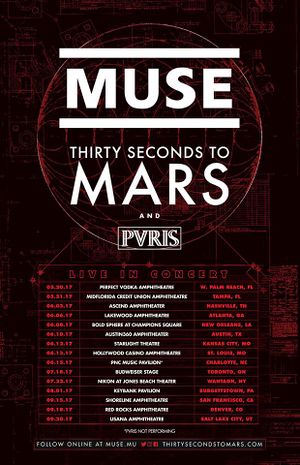 Officially announced on February 6th, 2017, the North American Summer Amphitheatre Tour was a tour around amphitheatres in USA, including one stop in Canada. The tour began on May 20th 2017 and lasted until September 20th of the same year.

As mentioned above, the tour featured stops in amphitheatres in the USA with one gig in Canada.

Special guests for the tour included 30 Seconds to Mars and Pvris (which were replaced by Missio on one gig).

The stage design/overall production was kept the same as with the Drones Festivals Tour and included 11 movable video monoliths behind the band.