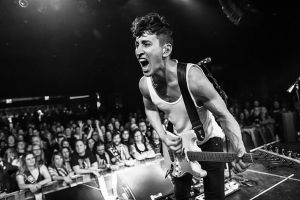 Before starting his solo project, Rocco was part of a pop-rock duo Secret Weapons, however, due to his band-mate Gerry Lange's Lyme disease and the subsequential retirement from touring, they had to take a hiatus, and Rocco came up with the solo project Des Rocs.

His first EP, "Let the Vultures In", was released in November of 2018.

The song "Used to the Darkness" was also used in the TV Series, Lucifer.

Des Rocs has supported Muse during the 2019 September leg of the Simulation Theory World Tour, in Oslo, Copenhagen, Berlin and Amsterdam.