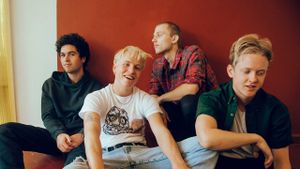 SWMRS (formerly Emily's Army), pronounced 'swimmers', is an American punk rock band formed in Oakland, California in 2004 by Cole Becker and Joey Armstrong (son of Billie Joe Armstrong), with Beckers's brother Max Becker joining only a few weeks afterwards. They drew on a mix of influences ranging from the Beach Boys to the Ramones to create their own brand of rock. The band added Travis Neumann in 2009, who later left in 2014 due to creative differences.

To more info, go here, or check their website.

They were supporting Muse on the 2019 Simulation Theory World Tour, at the gigs in Washington and Philadelphia. They've also supported Muse at few later European gigs, in Zurich and Nijmegen.