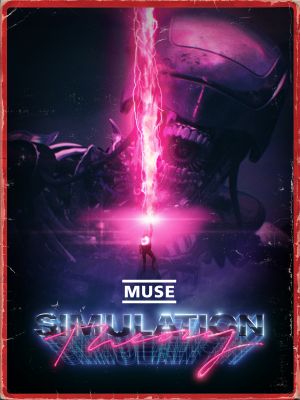 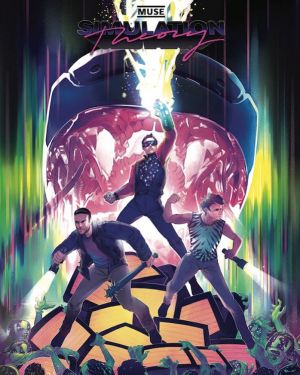 The latest live film coming from Muse, based around the 2019 album, Simulation Theory, was released in select IMAX cinemas on August 17th with digital downloads from Amazon, Google Play and iTunes released on August 21st with a deluxe box-set set to be released on 11th December, featuring a 5.1 DTS Master Audio Blu-Ray, together with an LP, both with audio from the film, paired with a Casette of the film score, which was written by Bellamy himself.

Muse started teasing with film's content in late spring of 2020 with a couple of GIFs from the film (see right), which could be found on Giphy. Muse also teased the film on Spotify with extracts from the film used as so called "Canvases" on Starlight, Uprising and Supermassive Black Hole. The film was later officially revealed by Muse on August 12th, 2020. A microsite soon followed with details about the film.

The film will differ to other previously released live films in that it includes a movie-like story, directed once again by Lance Drake based around the live show and musical themes with hired actors and Muse Dancers acting out certain scenes. The trailer for the movie can be seen here.

The posters for the film were designed to look like a slightly worn out VHS box sleeve insert.

Alongside the cinema and digital releases, a physical copy will also be released as a deluxe box-set in December of 2020. The box-set will feature a Blu-Ray with 5.1 DTS Master audio, packed in an VHS-inspired box, and an LP, both with audio from the film. The box set will also feature a cassette of the film score, written by Matt Bellamy, featuring songs that also appeared during the tour's live shows.

The box set also includes a Simulation Theory comic and a limited edition poster, both made by Marvel in collaboration with Muse.

It is available for pre-order on the muse.mu website here.

In fall of 2020, Muse and Stageverse are planning on releasing the live footage from the gig at Madrid's Wanda Metropolitano stadium, shot on July 26th, 2019, in a 360-degree 6K video format. Allthough it has not featured the movie aspects or footage from the show in London, the release was still considered as part of the Simulation Theory film.

The experience is designed to be an interactive online event with users being able to sign up with custom avatars and meet up with other atendees and buy virtual merch. The Simulation Theory VR Experience was the first virtual event of this kind.

The virtual experience was released in fall of 2020 on the Stageverse app for iOS and Android and will also launch on Oculus Quest later in the year. The VR Experience trailer can be seen here.

The movie follows a team of scientists investigating the source of an unknown paranormal anomaly, spreading across the globe. The center of the anomaly is in London and appears to be at Muse's stage. One of the scientists, known as Murphy touches the simulation theory arcade game and is electrocuted. He breaks the fabric of his reality and breaks into our own, standing alone out on the stage. He is soon pulled back, but shortly after is "bitten" by a phantom of a Muse Dancer. He then starts transforming into a monster after being infected by a mysterious pathogen. As his fellow researches try to stabilize his condition a woman in one of the muse dancer costumes appears. She informs them she is an NPC, serving the mainframe. Because of the tear in their reality, a virus has been released. And an entity known as the truth slayer is born. The scientists are given a look inside Murphy's head to see the construction of the Truth Slayer. We are given our first view of Matt Bellamy's character who is known as "The One" Meanwhile outside the media is breaking the news to the public that large Sections of London are being quarantined off from the public. The scientists call for immediate help with fumigation, NPC's arrive to spray out their infected numbers. Back in the lab the NPC suddenly takes control of the news broadcasts and puts words in their mouths. They deny the virus exists and state that "there is nothing to fear". The truth slayer breaks out of its containment, as the one enters a new reality. The One gains access to the mainframe and assimilates with it. Gaining the power of the glove. As the disinformation and chaos continues, the truth slayer arrives. But standing in it's way is the one. They have a climactic battle, with both using energy beams. In the end, The One prevails. The film ends with him being told he has saved this reality but there are more.

Director Lance Drake said that "the goal for Simulation Theory was to capture the scale of the electrifying live show and to expand upon its connection to the DNA of the world we built for the past three years in music videos for Muse. In a strange turn, the film’s alternate reality eerily started to mirror our own."

The film story is also be available in a comic book format, created by Marvel Comics which teamed up with the band. The comic is available to buy via the deluxe box set, accompanied with Marvel Comics' limited edition poster. (see Spread Gallery below for pictures)