San Siro during the gig with the Happy B-Day banner 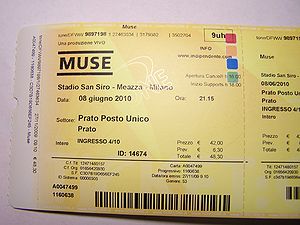 As with other 2010 stadia concerts, "Bernie the UFO" was displayed during Exogenesis: Symphony, with an acrobat hung underneath.

The most voted songs on the official setlist polls were Citizen Erased, Bliss, Showbiz, Plug In Baby and Hysteria, the latter two of which were played at the gig.

When asked which was the best date of the tour, Christopher Wolstenholme tweeted (with typo) 'Maybe the San Siro of possibly Old Trafford.' [3] 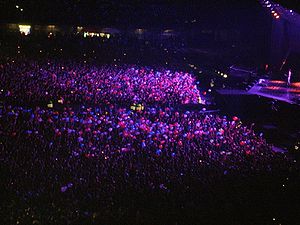 The gig took place the day before Matthew Bellamy's birthday. A 45m-long banner on which was printed "Happy B-Day Matt" was held opposite the stage. According to one attendee: "the banner wasn't printed, it was handmade by fans all over the country with garbage bags (black) and paper for the letters, then assembled at the stadium :D everyone was carrying a bit and it was fun to see it "coming together" during the preshow!"

The crowd sang a happy birthday chorus during the first encore break, during which coloured balloons were present among the crowd. This was organised over a period of six months, through Facebook, YouTube, muse.mu and a forum, by a group of Italian fans.

A mp3 copy of the performance can be found here