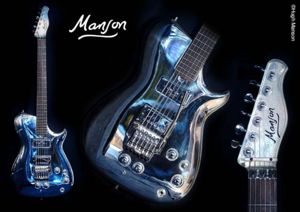 This is the guitar Bellamy really wanted when the Manson Rust Relic was ordered.

This guitar is much like the Manson Bomber, but with an internal Fuzz Factory circut, Ibanez Lo Pro edge Floyd Rose Tremolo, but includes no MIDI strip nor killswitch. The shape also appears to be even more rounded off than the first Bomber shape.

The Chrome Bomber is featured in the music video for "Knights of Cydonia".

Matt took delivery of this guitar around the time of the Live 8 2005 gig. The guitar made its live debut at Radio 1's Big Weekend on the 13th May 2006. As of the start of The 2nd Law tour this guitar was only used for Knights of Cydonia. Since the Detroit 2013 gig Matt instead began using his Manson Ali Top for this song, so that the Chorme Bomber was then presuambly used as a back up.

Contrary to speculation, it was seen being used live once again at the Webster Theatre gig in New York on May 8th 2015 through to the KROQ's Weenie Roast & Fiesta gig in Irvine, CA on May 16th, and was in Matt's guitar selection for the first short run of the US shows in 2015, being used for Hysteria, Bliss and Knights of Cydonia. The guitar was labeled number "4" on his strap by his tech, Chris.