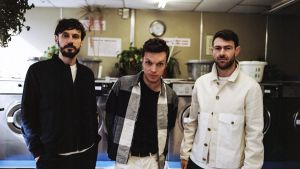 Friendly Fires are an English dance punk/indie rock band from St Albans, Hertfordshire. The band consists of Ed Macfarlane (vocals), Jack Savidge (drums) and Edd Gibson (guitar). TTheir self-titled debut album was released on 1 September 2008 under XL Recordings and was announced as one of the shortlisted twelve for the 2009 Mercury Prize on 21 July 2009.

In 2011, the band released their second album Pala. In 2014, the band took a break before returning back in 2017 with an announcement of a 2018 performance at O2 Academy Brixton and the release of their first single since 2012, Love Like Waves. In 2019, Friendly Fires released their first album in eight years called Inflorescent.

The band supported Muse at the San Siro Stadium during The Resistance Summer Tour 2010.