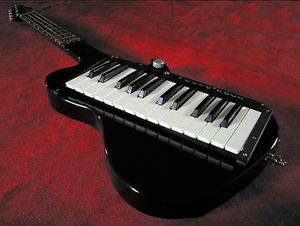 The first guitar to be built by Hugh Manson not to have any pickups. The strings are most likely for feel or to complete the circuit between the fretboard plates and the strings. It was, like the successor of this guitar, the Keytar, likely built out of one piece of poplar.

The Keytarcaster features the classic "Mattocaster" shape, with the right hand playing a two-octave keyboard and the left playing the bass notes up the neck.

It can also been seen in the video for Undisclosed Desires which premiered on MySpace on 3rd November 2009.

The Keytarcaster was later replaced by the Keytar in 2010, which is identical to this guitar but it includes neon lights.

It was first used at the Homecoming Teignmouth gig for Undisclosed Desires. It was used throughout The Resistance's arena tour and at a few open air and festival shows, and was last used at the [[ Stade de France gig in June of 2010.