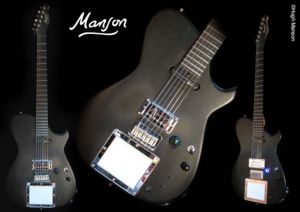 Not to be confused with the M1D1 Black, the "Black Midi" made its debut two months after the demise of the M1D1 Mirror, and was presumably its replacement (as both have Bare Knuckle Nailbomb Humbuckers at the bridge and Fernandes Sustainers at the neck). It was the first of Matt's Mansons to be fitted with a Tronical PowerTune Automatic Guitar Tuning System. When the guitar was freshly built, it only featured one MBK-2 pickup.

This guitar was usually used for songs that aren't played in standard tuning. It was most often tuned to Drop-C (CADGBE) for Map Of The Problematique. Other tunings were Drop-D tuning (DADGBE) for Dead Star, New Born and Stockholm Syndrome, E-Flat tuning (half-step down; E♭A♭D♭G♭B♭E♭) for Fury and Starlight and Drop-D-Flat tuning (D♭A♭D♭G♭B♭E♭) for MK Ultra. It was also used in standard tuning for a few times, for songs like Supermassive Black Hole and Time Is Running Out. Before it's retirement it was mostly used for Map of the Problematique only.

Although it is officially named as 'Black Midi', it is more known to fans as 'Seattle Manson'. It is also known that Matt calls it 'Auto'.

The Black Midi was first used during the Seattle gig on 9th September 2007, the first night of the final US leg of the Black Holes and Revelations tour, and it got it's last performance in 2011.