Chris uses three different custom made Status S2-Classic basses from the English guitar company Status Graphite. He first used the walnut one, then the black (graphite made) one and his latest model is the black (graphite) one with embedded LED's. The latter of which is a protoype model of the Status Chris Wolstenholme Signature Bass and differs slightly from the other two ones. It's unknown whether Chris still uses this prototype model or if he got a completly new signature model for playing live.

He acquired the Walnut one near the beginning of the The Resistance stadium tour. The black one was delivered just before Glastonbury 2010. The black one with LED's was used since the South America U2 Support. The walnut and black model were replaced with two new signature models during The 2nd Law tour, however the black one without LED's can been seen on some backstage photos. It was seen back live for the Drones World Tour in 2016. 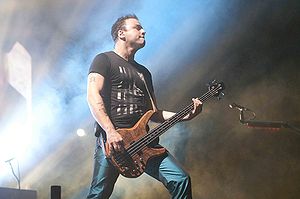 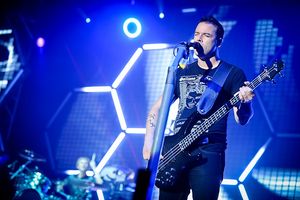