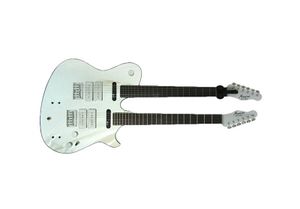 On the 16th of April 2010, Bare Knuckle Pickups' twitter feed announced that the company had "just" finished building "Twin P90 bridge soapbars" for a "custom Manson double neck guitar" being built for Matthew Bellamy.[1] This announcement coincided with a series of musewire updates concerning studio recording,[2] which culminated with a mention of a new song "in the oven"[3]. Assuming that said new song referred to the then-unreleased Neutron Star Collision, it became clear when the guitar was first unveiled in public that it and the aforementioned twitter updates were not connected—the Mirror Manson, not the Doubleneck, was in fact used to perform Neutron Star Collision.

The guitar features two necks, the bottom neck standard and the top neck fretless. The top neck also features a string dampener. Both necks incorporate a Fernandes Sustainer and two Bare Knuckle P90 soapbar pickups, the latter having been the first detail about the guitar revealed in mid-April by Bare Knuckle Pickups[1]. The guitar also features black binding around the top of the body and Gotoh's new Stealth tuners (with custom knobs as on the Delorean Manson).

Hugh Manson on the Double Neck

"I designed that in a dressing room in Canada. I was on tour taking care of John Paul Jones' gear on Them Crooked Vultures' world tour. Thing is, I always design full size. The only suitable 'paper' at this gig was a huge cardboard box. So I got a Sharpie pen, did this drawing on the floor of this dressing room, took an iPhone photo and sent it back to the Manson's shop. And Tim Stark who builds with me, made the double neck from that iPhone photo."

This was the second guitar Tim Stark had build for Bellamy.

This guitar was first played live at the 25th May 2010 Paris Casino gig.

The guitar almost met its demise at the Los Angeles Staples Center gig in September 2010, after a curtain snagged the stand holding it, and the Red Glitter Manson, pulling it off the tower. The Doubleneck survived, however the other guitar was damaged beyond repair and has since been replaced. The Doubleneck would continue to see live use until being used at it's final gig in Birsbane, during the Oceania leg of the Resistance tour.