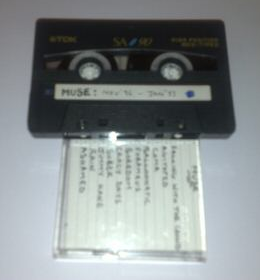 Muse did three recording sessions at Coombeshead Studios in Newton Abbot between November 1996 and April 1997. They recorded there surely more than 20 songs: some of them, in the following years, entered in the albums Showbiz and Origin of Symmetry, others became B-sides. From these sessions, recorded on Adat (Digital Audio Tape), they made various cassettes with different track lists from each other which were given to acquaintances and personalities of the local musical world. One of these cassette arrived to Dennis Smith who, after seeing them live in concert (at the Exeter Cavern Club in July 97) and listening to other tracks, decided to bring the Band at Sawmills Studio to record their first EP.

The band recorded different songs at each session, these are those known so far:

Other songs for sure recorded in Newton Abbot: Muscle Museum, Falling With The Crowd, Showbiz, Forameus, The Unfished. 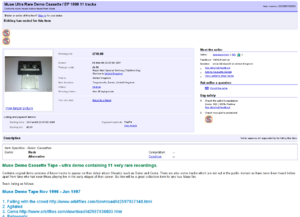 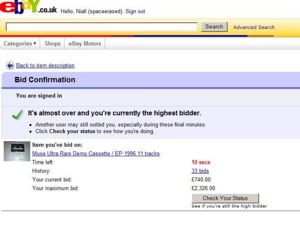 An untitled cassette featuring 11 tracks that Muse recorded at Coombeshead Studios[2] in Newton Abbot between November 1996 and January 1997. The only song released from these sessions was "Balloonatic", on the 1997 compilation Helping You Back to Work volume 1.

In January 2009, a 6-track demo tape from the first two sessions in Newton Abbot, was listed on eBay. The tape was copied from studio recordings for the seller by Matthew Bellamy. The original cassette tape contained a recording of Coombeshead College Choir that was copied over by Bellamy, and the B-side of the cassette contains five tracks of the seller's band.[16]

In 2009 and again in 2010 this cassette was listed on eBay. It had originally been sent to Chris Willsher of Ruptured Ambitions Records, based in Devon, by Muse. It featured four tracks from the Newton Abbot demo sessions, although the quality of the tracks on the tape ultimately proved to be better than those on the full demo tape.