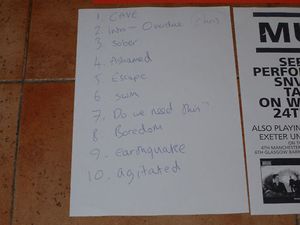 The only known proof of this song's existence.

Possibly the most mysterious and unknown Muse song of all time, "Swm" appeared on a setlist for a 1997 performance at the Exeter Cavern Club. No one knows what "Swm" sounds like, whether or not it is another song under another title, whether it was ever recorded, or anything else.

Live, the song was played circa 1997, though even then it is unsure approximately when. It did not appear on the 1997 Newton Abbot Demo or at the August 1997 performance at the Plymouth Hoe.

The background of "Swm" will remain one of the band's greatest mysteries until someone can find out what the song was or whether or not it became another song either by contacting the band/band's management or by interviewing people who may have seen the band live in the very early days.

But maybe it's just another song written very fast, considering at this time they played songs such as Twin, Plug In Baby, Yes Please and Showbiz, songs that were either new at the time or undergoing name changes.

Go back to Newton Abbot demo