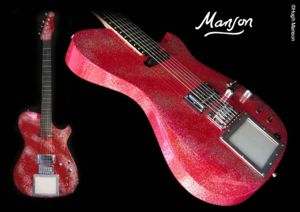 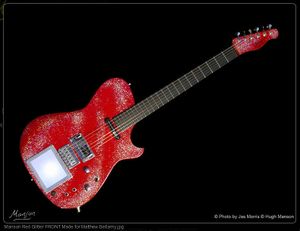 This guitar was built by Hugh Manson and based on the previous Mansons with the MIDI screen, such as the M1D1 Mirror, sharing the bridge pickup of the M1D1 and the sustainer system of the Kaoss Manson, but with a "glam" look of the glitter finish. It is the first glitter guitar built for Matt.

As Hugh Manson said, "Matt said he wanted a new guitar, and I asked him to write down what he wanted, and he wrote 'sparkles.' When I was making it, I used a, well, it was like a wheat sifter, and just put the glitter on a bit at a time, then blew off the extra. It reminded me of making Christmas cards. All I could think was, 'you've got to be kidding me. I was bad enough at this when I was young.'"

Hugh asked Matt what colour he wanted for the guitar, his response was "red", in which Hugh happened to have a tin of red paint that came with his TR4 car, which was used to paint the guitar.

The guitar was damaged beyond repair at the LA Staples Center 2010 gig after falling from the tower, and was replaced by the new Red Glitter guitar.

The broken body of this guitar has later been displayed in the MUSEum from 2015 - 2017 for the Drones 360 and the North American Summer Amphitheatre tours.

This guitar is featured on the "Uprising" music video.

Although it is officially named as "Red Glitter" or "Glitterati" (sometimes even "Red Sparkle"), Matt calls it "Santa", as he told in October's 2010 Australian Guitar Magazine.

Quote from Australian Guitar Magazine:
Interviewer: People might think that such fidgety gear wouldn’t be sturdy and hardwearing on the road – is that a misconception?
MB: Absolutely. There’s the guitar that I call “Santa”, which Hugh calls The Glitterati – it’s the red glittery one with the Kaoss Pad in, which I use on really heavy tracks like ‘Stockholm Syndrome’ and stuff. The last few months I’ve been throwing that guitar in the air, not necessarily trying to smash it, but I’ve certainly thrown it round. I’ve thrown it against the amp. I’ve thrown it into Dom [Howard]‘s drumkit. It’s landed on its neck, on it’s side, it’s gone all over the place and the Kaoss Pad has not been affected at all. It’s got a couple of chips on the woodwork, but generally I think they’re pretty strong.

This guitar got it's first outing on 26th May 2007, at the Rockhal Festival in Luxembourg.

Throughout it's life, it was often thrown in the air or into Dom's drums, or even stabbed in the amp by Matt. A few times the guitar was too damaged to be playable, and was sent to Hugh Manson to repair it. Here are several most noted examples:

Ironically, after months of being chucked around by Matt, normally after Stockholm Syndrome's outro, Glitterati finally met it's end after falling from the towers at the start of Uprising at LA Staples Center 2010-9-26 gig. The curtains dropped and snagged onto the guitar stand behind Matt. Then presumably the roadies pulled the curtain, letting the guitar stand, where also the Doubleneck (who survived) was placed, fall. The MB-1 Red Glitter was used as a replacement until Matt got Santa 2.0 three weeks later. Footage of this guitar stand fall can be seen here (at 2m50s).