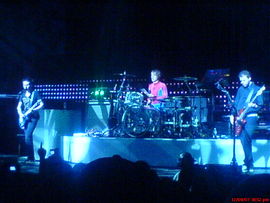 The official broadcast times were as follows:[3]

Before Jimmy Eat World's last song, their lead singer made a comment on Muse's showmanship.

Matthew Bellamy literally did take a bow during 'Take a Bow'. The band made a mistake in the transition from the 'Whole Lotta Love' riff to the "Jimmy Jam" riff - Dominic Howard and Christopher Wolstenholme continued playing 'Whole Lotta Love' whilst Bellamy went onto the next riff (JimmyJam). Balloons were released during 'Plug In Baby'. During the 'New Born' solo, Bellamy seemed to have mistaken his whammy expression pedal for his volume expression pedal, causing a volume swell instead of a whammy swell. Also, during "Time Is Running Out", his Kaoss Manson seemed to malfunction for a brief moment.

Bellamy used the "vibrato" setting on his Kaoss Pad to play 'the Star-Spangled Banner' (the national anthem of United States) before 'Hysteria', which can be heard in this video.

During the second verse of 'New Born', Bellamy is seen using his whammy to create the patterns usually associated with him strumming. He seemed throughout the performance to have lost some control over his voice due to the lack of clarity in his voice as well as his constant gasping for breath.

After 'Knights of Cydonia', Bellamy hinted that they'd play Los Angeles again in 2008 by saying 'see you next year'.

Howard wore his Spiderman outfit for the show.

The concert was webcast in asf format, with one ~300k stream and one ~600k stream. A dump of the 600k asf web stream can be found here.