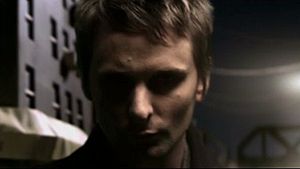 The band were filming for the Uprising video on or around 30th August 2009.[1] At least part of the video contains a shot of the band performing on the back of an old-fashioned pickup truck. On 17th of September, the band announced on their Facebook profile that the video was available for streaming on this page via MTV UK.

The video features the band playing on the back of an old-fashioned pickup truck in motion, surrounded by tiny plastic figures of static people, and it is implied that the pickup is a toy. As the video progresses we see the people burning teddy bears on a bonfire, and later the bears emerge from the earth and start attacking the city. The video contains references to the banking crisis of 2008/2009 that inspired the song[2], including the famous clip of disgraced financier Bernard Madoff being shoved by a pedestrian en route to his trial.

The video was directed by Sam Stephens (who was also the editor), John Hobbs and Ariel Danziger. It was produced by Kristin Tomborello and commisioned by Warner Music and Taste Media.

Shot over four days on two continents, two 1938 GMC pickup trucks were used (of drastically different sizes.) Hydra had this to say about the promo:

“A compressed delivery schedule meant an intense 11 days in-house edit/compositing marathon, with our whole post team living, eating, and breathing bears for way longer than what could be considered physically or mentally healthy. Fortunately, we feel our delirium translated quite well into the paranoia and nightmarish anti-logic of the finished piece. Note: Many teddy bears were indeed harmed in the making of this video. Special thanks to Warner Brothers for supplying us with so much bonfire fodder. And to the lovely woman on Ebay who sold us the antique Hungarian bear, know that he’s now resting in a much better place with a steel yarmulke stitched into his head”.

Go back to Uprising