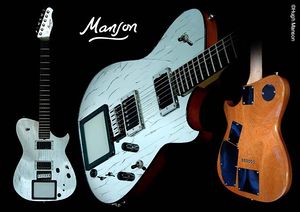 The M1D1 Mirror is a guitar that Hugh Manson built for review in the March 2006 issue of Guitarist Magazine and is the second of Bellamy's Mansons to feature an X-Y pad.

This guitar features a lacquered mahogany body with a scratched mirror top. It is, so far, the only one of Matt's guitars to feature any exposed wood on the body. It features standard black volume and tone knobs, black bridge with chrome saddles, standard chrome tuning pegs and black frame for the XY pad.

The guitar was damaged when Matthew Bellamy threw it at a strobe light. Manson's Guitar confirmed that it had been split in half and now resides inside Hugh's shop, where it can be seen on display.

The M1D1 Mirror was replaced by the Black Midi.

The M1D1 Mirror made its live debut at the Milan gig on 7th June 2006. It was destroyed at the end of Stockholm Syndrome at Fuji Rock Festival on 27th July 2007.