MuseWiki, wiki for the band Muse
(Redirected from Manson Santa 2.0)
Jump to navigation Jump to search 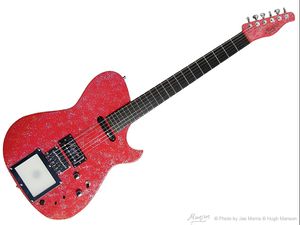 This was the new guitar built by Hugh Manson to replace Matt's original Manson Red Glitter, which was damaged beyond repair after being dragged off the tower by a curtain at Los Angeles Staples Center in September of 2010. The new guitar has a more even coat of glitter and a Mirror Perspex X-Y Pad frame, as opposed to it's predecessor, which bore 4 distinct lines of glitter and an alloy X-Y Pad frame. The new guitar also has a black pickup frame at the bridge pickup, as opposed to it's predecessor having a silver pickup frame.

This guitar received it's first live outing on 21st October 2010, at the Quebec City Pepsi Coliseum gig, where already it began to inherit the spirit of it's predecessor by being thrown into Dominic Howard's china cymbal. Bellamy has been throwing this guitar around quite extensively, mostly at the end of Stockholm Syndrome. A video of him throwing it at Howard's kick drum at the Rod Laver Arena gig in Melbourne, shows the guitar getting a battering. At the Bassendean Oval gig, the guitar was thrown repeatedly and violently at Howard's drum-set, again at the end of Stockholm Syndrome.

It was believed the guitar was damaged beyond repair after the Kyiv Palats Sportu gig, but was eventually repaired by Mansons, and was back in action at the LA Rising gig.

In August 2011, for the gigs at Reading and Leeds, it had a Manson DL-1 Neck, as the original's headstock was split after being thrown in the air whilst on tour in the USA.

This guitar was seen as a live back-up at the 2013 Stadium gigs, until the Rome gig, where Matt played it in replacement for the then damaged Manson Red Carbon.

The Red Glitter 2.0 is now retired, and was displayed in the MUSEum between 2015 and 2017 for the Drones 360 and North American Summer Amphitheatre tours. For this display, it had it's red headstock fitted on again.