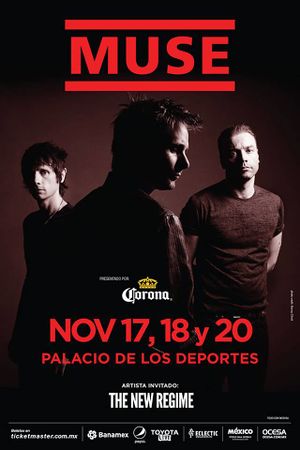 A headlining tour in support of Drones, The Drones World Tour 2015/16 or the Drones 360 Tour, as it's sometimes called, officially began on November 17th, 2015 with two sold out gigs at Palacio de Los Deportes in Mexico City. Prior to the first concert, Muse have also released an official trailer for the Drones World Tour which can be seen here. The tour ended in 2016.

This was an indoor arena exclusive headlining tour, due to drones being used, the outdoor use of which was forbidden by the health and safety restrictions. The official beginning of the tour was on November 17th 2015 in Mexico City, and the tour lasted until summer of 2016.

This was the first time the band were performing in the middle of the arena on a 360 stage, with the audience surrounding them, giving them a 360 degree audio/visual experience.

According to Matt, this was their version of the famous Pink Floyd's The Wall.

The tour's warm up gigs took place on a short tour across Asia and South America in Autumn of 2015, including their first performance in mainland China. The warm up gigs' setlists had some basis for the main tour sets, with Psycho and Reapers as show openers and Voodoo Child being the main intro to SMBH. Warm up gigs also included Unsustainable, which wasn't played on the main tour.

The first warm up gig was in Beijing, China and the last one was in Bogotá, Columbia.

The stage design was the same as with the Drones Festivals Tour 2015. Opening acts included The Ruse for most of the Asian shows, Utopians for most of the South American shows and TELEBIT for the last show in Bogotá.

The stage consisted of a round circle in the middle of the arena with two runways, spanning across the entire arena, each one with a bigger hammerhead stage on the end. The stage and the runways are low, , so the band can get intimate with the crowd, while the two hammerheads are at stage-level. Located underneath the two hammerheads are the tech bunkers. These smaller b-stages are also equipped with one raiser each (one for Chris and one for Matt and his piano). This is also the first Muse stage to feature no drum raiser, and Morgan's equipment is placed in a bunker/hole lowered into the stage, facing the other direction.

Above the main circle is a tube-shaped LCD screen, displaying some visuals, while other visuals can also be projected on transparent curtains, placed above the runways, which can lower or raise at any time during the concert. The visual aspects of the tour are held by Moment Factory, a Montreal-based new media and entertainment studio, which have worked on tours of various musical artists such as Bon Jovi, Madonna, Imagine Dragons and Nine Inch Nails as well as held their own visual art installations across the world.

The tour also includes 16 custom made self-controlled drones, or HFOs (High Flying Objects), as the crew call them, made in partnership with a Dutch company Path65. These drones are controlled by a custom written computer programs. Sensors, which help control them, are placed around the venues and were callibrated for each venue. These drones were, when not in use, "parked" on trusses above the stage. Alongside these 16 drones was a bigger inflatable drone, shaped like a military aircraft/drone, hovering above the audience during certain parts of songs such as the middle part of The Globalist. On the 5th night in Paris, two of the bigger drones, called "Reapers" were used. This was also the only time that they've used two instead of one. The big drone was sometimes refered to by fans as "The Dildrone".

According to Bellamy, they originally wanted each drone to have it's own projection on it (hence the matte-white drones they only used during the opening Mexico gigs in 2015), however that was technically impossible. They did however simulate how that would look using After Effects in the Drones World Tour movie.

During Mercy, confetti, shaped like "Drones" stick figures are deployed above the audience.

When the band enters the arena, they're secretly escorted into the arena as part of the "Revolt" police (several "actors" dressed as riot police from the Revolt music video with illuminating goggles).

Unlike previous tours, no CO2 streamers are used during or at the end of the show. The production also didn't allow Matt's feedback amp to be present on the stage, making this the first tour with no amps on stage.

During their stay in Brussels, instead of the usual place on the hovering construction above the stage, Drone stations had to be placed on the floor due to the height restrictions of the venue. 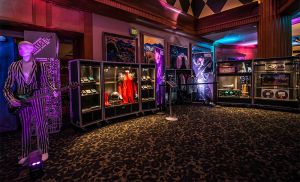 The Enchanced Experience Package was a special VIP package containing one premium VIP ticket, early access to the venue, admission to the MUSEum, invitation to the pre-show party at the so called Starlight Lounge, one limited edition tour poster designed exclusively for the Enchanced Experience guests, one souvenir laminate and private merch shopping.

The MUSEum was a travelling exhibition which was, as mentioned above, available to visit by buying the Enchanced Experience Package. This was the first tour to include the MUSEum.

The MUSEum was included again at the North American Summer Amphitheatre Tour in 2017.

The Drones World Tour movie was released on July 12th 2018 in cinemas all around the world. The movie was directed by Tom Kirk and Jan Willem Schram with additional direction and production by Hans-Peter Van Velthoven. It was produced by Corrino Studios. The movie is comprised of footage shot at four European shows in 2016, in Germany, Italy and the Netherlands.