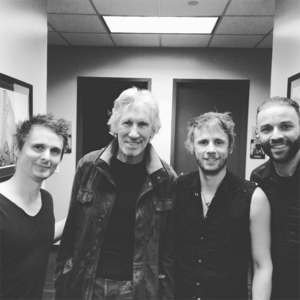 Roger Water and Muse at the Barclays Center Backstage

Pink Floyd were a progressive rock band with multi-platinum albums and one of the biggest bands of the 1970s. They pioneered the kind of flamboyant live shows featuring massive light and effects shows now staged by Muse. Their rock opera The Wall was an influence on Absolution. Moreover, the video for the song Hysteria was heavily influenced by a scene from the film version of The Wall in which the protagonist becomes extremely distressed while watching TV.

Speaking for the iTunes LP feature for The Resistance, Matthew Bellamy said the following about the inspirations and meanings of Exogenesis: Symphony:

“ ["Exogenesis: Symphony"] is influenced by Rachmaninov, Richard Strauss, Chopin and Pink Floyd. It looks at the concept of 'panspermia'. It is a story of humanity coming to an end and everyone pinning their hopes on a group of astronauts who go out to explore space and spread humanity to another planet. Part 1 is a jaded acceptance that civilization will end. Part 2 is a desperate hope that sending the astronauts to find and populate other planets will be successful alongside the recognition that this is the last hope. Finally, Part 3 is when the astronauts realize that it is just one big cycle, and recognize that unless humanity can change it will happen all over again "

Go back to Influences