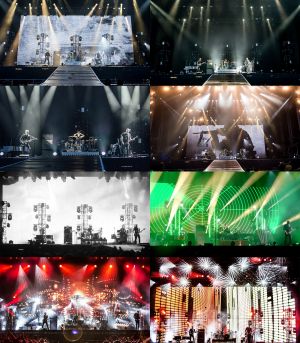 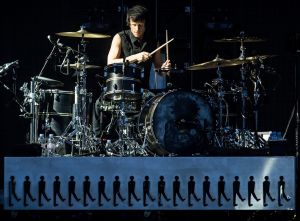 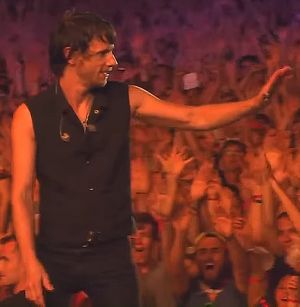 The Drones Festivals Tour 2015 (also reffered to as the Drones Tour 2015) began on May 23rd, 2015, with the performance at Norwich's Earlham Park in the UK, at Radio 1's Big Weekend festival. The entirety of the tour was set in Europe, with one exception being the Fuji Rock Festival in Japan. The tour ended with the show at the first installment of Lollapalooza Berlin.

As mentioned above, the tour began with the BBC Radio 1's Big Weekend gig in the UK, and ended with the gig on the first installment of Lollapalooza Festival Berlin. The tour also included Muse's first performance and headlining of Download Festival in the UK.

The first shows of the tour were announced and confirmed on November 5th, 2014, via Muse's Facebook. The first announced gigs were the ones at Rockavaria, Der Ring - Grüne Hölle Rock (the festival was relocated and renamed after the announcement) and Rock in Vienna.

First rehearsals for the tour took part in late April of 2015, and were held in Air Studios, where Muse previously rehearsed for the Origin of Symmetry anniversary concerts at Reading and Leeds festivals, and where Muse also recorded Absolution, parts of The 2nd Law, Drones and Simulation Theory. Main production rehearsals, including lighting and stage design, took part in late May of 2015, at an unknown rehearsal space in the UK, as shown on Tom's Twitter post.

Dominic Howard on the tour shows: "The summer shows are pretty kind of raw and have dynamic lighting. It is not overblown. It is really kind of mean looking, I think."

The stage design kept the minimal basis of the Psycho Tours, while bringing the gigs up a level, in terms of lighting and show.

The stage had the same set up as on the Psycho Tours with a Marshall stack and a drum riser. Instead of Morgan's keyboard ona regular stand, the light-show synth station, used during The 2nd Law tours, was brought back. The sides of the drum riser were made out of aluminium, with the front having the drones-men shapes cut out.

Behind the band was a big LED screen displaying visuals and camera feed, covering up the entire back scene. Five black lighting trusses with moving fixtures and LED strips were sat before the LED screen, providing light shows when the screen didn't display any visuals, or adding an additional elements to the existing visuals displayed on the screen.

Red confetti and red/white streamers were used for Mercy. For the Download Festival gig, flame machines were also used during certain songs.

In terms of costumes, the band wore the same all-black jumpsuits used during the Psycho US Tour, exception being Howard, who ditched the jumpsuit but wore a satin black sleeveless shirt (the design of which was based around the jupmsuits), and black pants, for easier mobility when drumming.

On the tour setlists, Muse combined older, heavier, less known songs with more known songs. Off of Drones, Mercy and The Handler made their debut appearances. Munich Jam made it's debut also, as did JFK. Apocalypse Please was played on the tour for the first time since 2008. Micro Cuts and Citizen Erased were played for the first time since 2013. All tour sets had 16-17 songs.

All tour setlists had 16-17 songs with many modifications, replacements and rotations happening as the tour went on, allthough the basis of the set remained the same. The only shorter set with 12 songs was played at BBC Radio 1's Big Weekend.

Small gigs and TV show performances that took place outside of the main tour.